Renown­ed politi­cal Raja Ziad Sikand­ar has also hopped in on the PTI bandwa­gon
By Our Correspondent
Published: June 19, 2018
Tweet Email 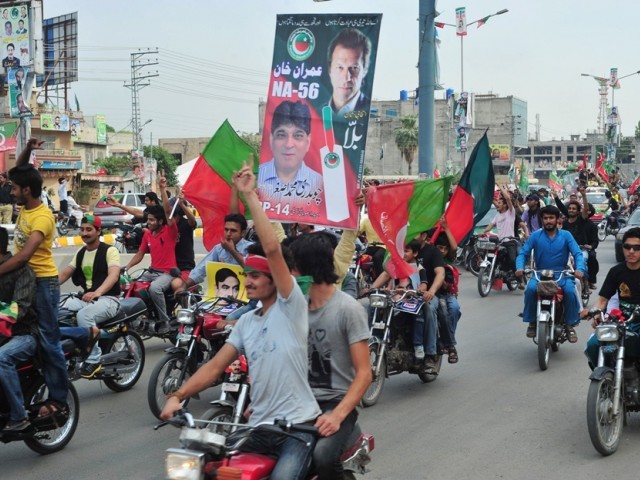 In this file photo, activists of PTI carry posters and wave flags as they drive through streets. PHOTO: AFP

JHELUM: Competition between Pakistan Tehreek e Insaf(PTI)  and Pakistan Muslim League-Nawaz is in full swing in Jhelum ahead of general elections.

Renowned political and social figure Raja Ziad Sikandar and hundreds of comrades of his Badhar community have also hopped in on the PTI bandwagon. The announcement was made on Monday after a meeting between Altaf and Raja Ziad Sikandar. “We vow to ensure a heavy victory for Chaudhry Altaf,” he said in his announcement at his home in Jhelum.

Raja Khalid Pervez, another known political figure from Borian, also joined PTI along with several members of his community.

On eve of Eid: Five drown in Pindi’s river of trash