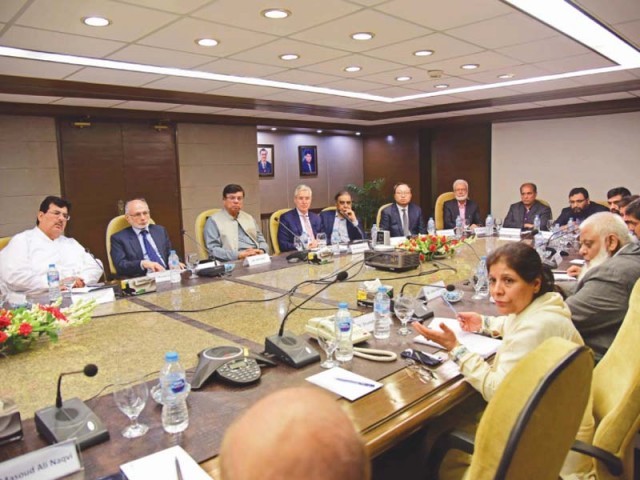 During the meeting, the minister offered her support for capital market development and sought cooperation from the business community to strengthen the economy PHOTO: PSX

KARACHI: The caretaker government, with its limited mandate to fix the faltering economy, has urged bankers and stockbrokers to play their role in making the tax amnesty scheme successful and the first dollar-based savings certificates for overseas Pakistanis to shore up the critically low foreign currency reserves.

To make the scheme successful, the government is ready to make amendments to relevant laws in order to remove the emerging irritants. In that regard, Finance Minister Dr Shamshad Akhtar held meetings with the State Bank of Pakistan (SBP) late last week and the Pakistan Stock Exchange’s (PSX) board of directors and senior members on Monday.

To incorporate the amendment and remove other irritants, the minister summoned a meeting of all the regulators and stakeholders in Islamabad on Wednesday. It would review the irritants and take decision for their removal.

The regulators included the SBP, Securities and Exchange Commission of Pakistan (SECP) and the Federal Board of Revenue (FBR) whereas the stakeholders comprised industrialists and exporters.

The minister told the participants that the amnesty scheme would expire on June 30 and only 12 days were left.

“She told the participants that the scheme cannot be extended beyond the June 30 deadline and they should work diligently to maximise the assets declared under the scheme,” a PSX press statement said.

According to SBP data, Pakistan’s foreign currency reserves depleted to less than two months of import cover at $10.07 billion by June 8, 2018. The country also needs an additional $5 billion to pay off its debt and make interest payments by the end of December.

In April, the former PML-N government introduced the amnesty scheme, offering overseas and resident Pakistanis to declare their hidden assets at nominal tax payment of 2-5% of the total value of their assets.

The scheme focused on increasing the foreign currency reserves, widening the tax net and documenting the economy.

Independent economists and individuals estimate that $1-4 billion will be added to the foreign currency reserves through the scheme.

Besides, the government has estimated to receive another $500 million to $1 billion in the next one year through the launch of first dollar-based savings certificates for overseas Pakistanis.

“The government will give final approval to the launch of savings certificates in a day or two,” said a meeting participant.

He elaborated that the laws were ready to float the savings certificates whereas the Ministry of Law and the legal department of finance ministry would give their final approval in a day or two.

“The approval will allow the Central Directorate of National Savings (CDNS) to start paying return on the savings certificate from the first day of the launch,” he added.

The PSX statement added that the minister clarified some issues relating to nominee accounts held at the CDC and proposed that a committee, including the Ministry of Finance, SBP, FBR and private sector should make recommendations by June 21 to eliminate possible ambiguities and hurdles.

In her closing remarks, the minister offered her support for capital market development and sought cooperation from the business community to strengthen the economy.

She assured them that, despite its limited mandate, the caretaker government would do its best to promote trade and industry.

She also directed the PSX to form a committee in order to propose a five-year roadmap for the development of Pakistan’s capital market.