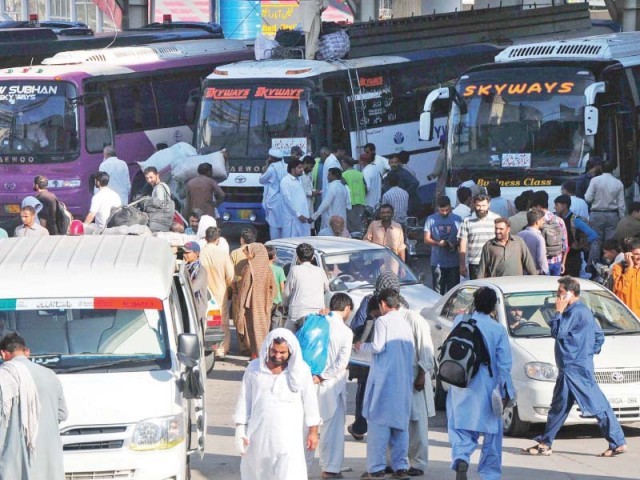 ISLAMABAD / RAWALPINDI: As has become customary, transporters did not let commuters to return to their homes to celebrate Eidul Fitr with their families without first paying excess fares.

Public transporters continued to overcharge passengers on the pretext of shortage of vehicles and a huge rush of people heading home for Eid.

This year, commuters had to travel all the way to Pirwadhai, Soan and Karachi Company as most of the illegal bus stands littered on various greenbelts of the city have been demolished by the Capital Development Authority (CDA) without providing an alternative to citizens.

1,400 sanitary staff on duty during Eid

Since a majority of people live in the twin cities for work and business, they prefer to return to their hometowns to celebrate Eid with their loved ones. There is thus an annual exodus on this auspicious occasion.

This large-scale movement of people creates a rush at the bus stands and railway stations. In turn, operators of public transport use this as an opportunity to hike fares illegally and unofficially.

However, even after paying the substantially higher fares, migrant workers can barely find any room to even sit on the rooftops of these vehicles.

Once these loaded busses depart, the capital bears a deserted look.

Since people were expecting Eid to fall on Friday, transporters utilised every operating vehicle to take migrants to their homes. 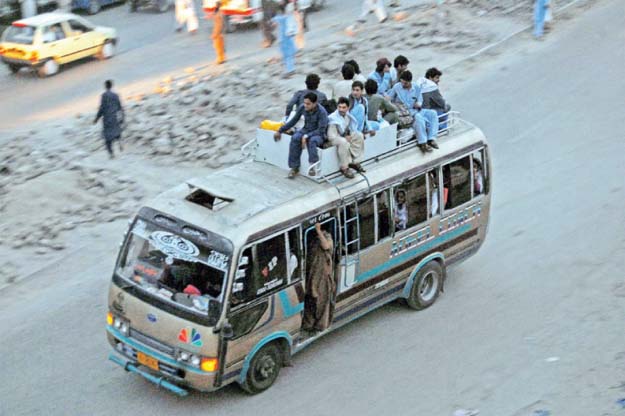 An extra day, though, bode well for people going to far off cities such as Karachi and Quetta.

While the government has announced official Eid holidays from Friday to Monday, many government and private employees hailing from remote areas have applied for extra leaves in almost all organisations and ministries.

The routine hustle and bustle in the twin cities, thus, nearly grinds to a halt during these days.

It was no surprise then that on Friday, most of the roads, markets and shopping centres bore a deserted look.

Some people, who had their own transport or were running private businesses, were seen plying the roads.

In normal days big shopping plazas and main wholesale markets are closed on Friday. but some traders braced for a last minute rush of shoppers, they too would be off to their respective cities and villages after winding up their Eid sales that often continue past midnight.

In addition, a majority of small restaurants and shops in twin cities have closed for Eid.

City to be spic and span for Eidul Fitr

Meanwhile, in Rawalpindi on Thursday, huge crowds of people could be seen thronging bus stands in a bid to reach their villages and hometowns to celebrate Eid.

Shortage of vehicles and soaring temperatures added to the problems of distraught passengers who were suffering at the hands of the unorganised public transport sector.

With mercury soaring above 40 degrees Celsius, people were losing their cool. Commuters and transporters were seen arguing over fares, baggage and seats.

The commuters are not always at fault because transporters tend to push four people when there is space available for only three.

Even the Regional Transport Authority (RTA) teams seemed helpless in providing the public with much-needed transport.

The regional transport authority has set up teams at various transport stops across Rawalpindi with monitoring teams as well as a control room to help passengers with loading.

When Express News contacted senior officials of the regional transport authority regarding this issue, they said that they had only received one complaint so far about overcharging. They added that they had promptly responded to the complaint and took action against the transporter and returned the excess fare to the passengers.

Regarding the issue of lack of public transport at stops and overloading, they informed that the transporters that left on Thursday morning had stayed back to celebrate Eid with their families.

Regarding the issue of overloading, they stated that it was not the transporters who were forcing the passengers to squeeze into the vehicles, rather it was the passengers who had squeezed into their seats by their own free will.

Moreover, they explained that the RTA teams were busy monitoring the situation at the transport stops, trying to provide help to as many passengers as possible.

Meanwhile, the Islamabad and Motorway police have set up check posts to check overloading and overcharging, and fining those found guilty of these indiscretions.

According to details, labourers who hail from DG Khan, Dera Ismail Khan, Muzaffar Goth, South Punjab and Kashmir, as well as Khyber-Pakhtunkhwa are returning to their hometowns to celebrate Eid with their families.

A motorway police spokesperson said that they had devised a strategy to control the overcharging every Eid and that it will be implemented this year as well, with responsible individuals being fined for overcharging.

Many vehicles are being checked on the spot by the police on GT Road and Motorway.

Bakeries, sweet shops witness the most rush in Quetta