S Korea hails Trump-Kim summit as 'talks of the century'

S Korea hails Trump-Kim summit as 'talks of the century'

We hope the summit will be a succes­s and bring us a comple­te denucl­earisa­tion, peace and a new era, Moon said
By AFP
Published: June 12, 2018
Tweet Email 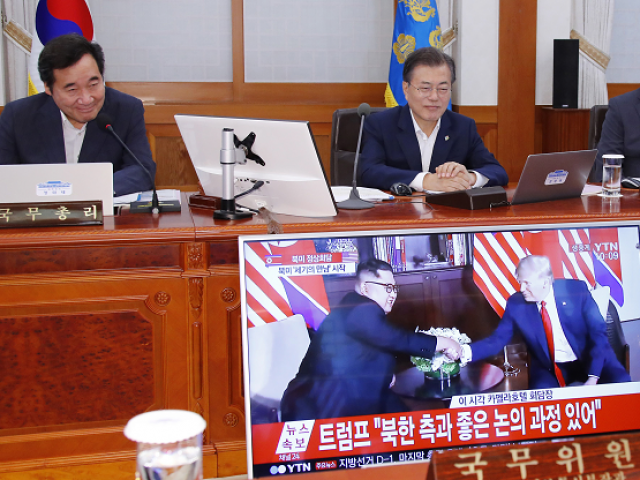 SEOUL: South Koreans erupted in applause Tuesday as Donald Trump and Kim Jong Un met for what local media billed as the “talks of the century”.

As the historic first meeting between a sitting US president and North Korean leader began in Singapore, images of Trump and Kim exchanging handshakes and warm words drew jubilant reactions in Seoul and hopes for a new beginning with Pyongyang.

“We hope the summit will be a success and bring us a complete denuclearisation, peace and a new era” in relations between the two Koreas and the United States, South Korean President Moon Jae-in said.

Moon, whose earlier meetings with Kim had paved the way for the Singapore summit, smiled and applauded alongside his cabinet ministers as they watched live-streamed scenes from the summit at the presidential Blue House.

He has spent “a sleepless night” with excitement ahead of the meeting, his office said.

The English language Korea Times welcomed the meeting as a step towards ending tensions on the Korean peninsula, which has been divided between the communist North and democratic South for nearly 70 years.

Since the 1950-53 Korean War, South Korea has grown into one of the most prosperous countries in Asia, while the isolationist North has suffered a stagnant economy and alarmed its neighbours with its increasingly sophisticated nuclear weapons programme.

“The two leaders are certainly under great pressure to make the talks of the century a success,” the editorial said.

“We hope today’s summit will make a breakthrough to open a new era of peace and prosperity.”

Elsewhere scores of people were glued to TV screens at the Seoul railway station, cheering and clapping in response to Trump and Kim’s cordial greetings.

Jung A-im, a university student, said she was moved while watching the landmark meeting.

“Looking at the two leaders shaking hands, I thought… ‘I am living in a historical moment’,” she told AFP.

Many others watched live footage of the summit on their phones.
“A great shift in world history is in the making,” one Internet user said in a comment response to a news story.

But others were sceptical of Pyongyang’s intentions, citing earlier attempts to improve relations that later foundered.

“Kim Jong Un’s agreement to meet Trump means he’s having a hard time (from sanctions). But we’re giving him a chance to survive again after we did so with Kim Jong-il,” wrote another, referring to previous peace overtures to the North Korean leader’s father.