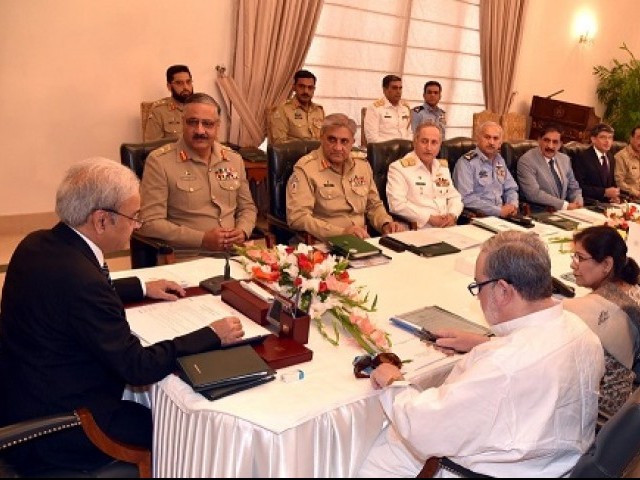 ISLAMABAD: Ahead of an all-important Financial Action Task Force (FATF) moot scheduled in France later this month to take a crucial decision regarding Pakistan, the civil-military leadership on Friday ‘expressed satisfaction over the progress made so far’ to comply with the FATF framework.

The matter was reviewed in detail in the 25th meeting of the National Security Committee (NSC), chaired by Prime Minister Nasirul Mulk. It was the NSC’s first huddle since Mulk assumed charge as interim premier on June 1.

Pakistan to go on FATF terror financing list in June

Pakistan is required to submit an action plan for review by the FATF with regard to its actions to curb money laundering and terror financing. Reports suggest that Islamabad risks being placed on the blacklist of countries that financially aid terrorism if its action plan is rejected by the task force.

According to a press release from the Prime Minister’s Office, Finance Minister Dr Shamshad Akhtar gave a detailed presentation to the NSC about the upcoming FATF meeting and the measures – both administrative and legal – taken so far by the country to meet FATF requirements.

“The committee directed that the progress should be shared with the FATF Secretariat in the upcoming meeting. The committee reaffirmed the commitment of the country to work with the FATF and other international organisations in achieving common goals and shared objectives.

“While reviewing various actions taken towards fulfilling country’s international responsibilities under the FATF framework, the meeting expressed satisfaction over the progress made so far,” the PM Office statement said.

According to the official communiqué the PM shared with the committee members the “contents of his telephonic discussion with the US Vice President Mike Pence”.

Pence on Thursday phoned Mulk to congratulate him on assuming the office and conveyed the good wishes of President Donald Trump. Both the leaders had agreed to the ‘importance of strengthening bilateral relations’ as well as pursuing the common objective of peace and stability in Afghanistan.

In February this year, FATF, an intergovernmental body which sets global standards against the illicit financing, put Pakistan on its watch list. Pakistan’s inclusion in the grey list implied that it is among those countries that do not do enough to curb terror financing.

Officials said Pakistan would share with the FATF the gains achieved in its counterterrorism drive.

Requesting anonymity, a government official said the FATF’s concerns mainly involve the alleged presence of outlawed organisations in Pakistan that are operating under different names after being proscribed.

“Our counterterrorism operations at north-western borderlands and different parts of the country have been a thorough success. Regardless of these successes, the FATF’s point of concern is the alleged home-grown outfits. We need to convince the world to have done enough against these organisations in order to avoid any drastic measures from FATF,” said the official.

On Wednesday, Pakistan reviewed its new draft action plan for submission to the FATF and discussed the FATF’s recommendations to curb terror-financing in first meeting of the caretaker federal cabinet. The proposed action plan was then reviewed in a meeting chaired by the finance minister.

“The prime minister reaffirmed moral, political and diplomatic support of the people and the Government of Pakistan to the people of Jammu and Kashmir in their legitimate struggle for their right to self-determination, as promised to them under the relevant UN Resolutions.

“Stressing upon the need for an immediate end to the state-sponsored reign of terror unleashed in the IOK, the PM observed that the Kashmir dispute cannot be resolved through violence and use of force. Dialogue and diplomacy are the only solution to resolve this decades old dispute,” a press release said

The statement quoted AJK president as having apprised the PM that the “whole of AJK will observe Palestine and Kashmir Day (Friday) to remind the international community of fulfilling their commitment and resolving these issues under the relevant resolutions of the international organisations.”