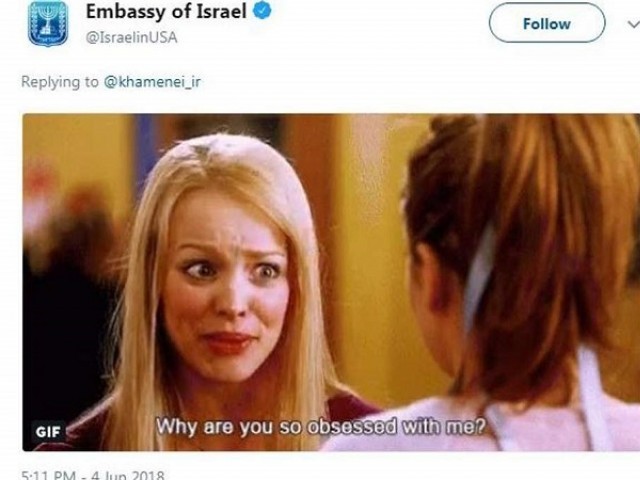 While embassy responds with a joke, Israeli President Benjamin Netanyahu does not discount threats by Khamanei PHOTO COURTESY: THE INDEPENDENT

Israel posted a gif from the hollywood chick-flick movie, ‘Mean Girls’ in response to Iranian Supreme leader’s threat to ‘eradicate’ Israel, on the micro-blogging site Twitter.

Our stance against Israel is the same stance we have always taken. #Israel is a malignant cancerous tumor in the West Asian region that has to be removed and eradicated: it is possible and it will happen. 7/31/91#GreatReturnMarch

In response, the Israeli embassy took a jibe at the Supreme leader by posting a gif in which Regina George- a character from the movie played by Rachael McAdams, asks: “Why are you so obsessed with me?”

The post became viral on social media, whereby Twitter users were seen frowning and joking that such tweets and snapbacks embodied ‘diplomacy in 2018’

Israel’s tweet echoed a tactic often employed by Russia’s UK embassy, which frequently uses memes to taunt or attack the British government and media – sometimes receiving thousands of likes and retweets in the process.

On Tuesday, Prime Minister Benjamin Netanyahu said that Iranian plan to increase its nuclear enrichment capacity was aimed at producing nuclear weapons to be used against Israel.

“Two days ago, Ayatollah Khamenei, Iran’s supreme leader, stated his intention to destroy the State of Israel,” Netanyahu said in a video posted on social media.

“Yesterday he explained how he would do it – by unlimited enrichment of uranium to create an arsenal of nuclear bombs.”