Drowning in trash: Pakistan among top river dumpers of plastics

Drowning in trash: Pakistan among top river dumpers of plastics 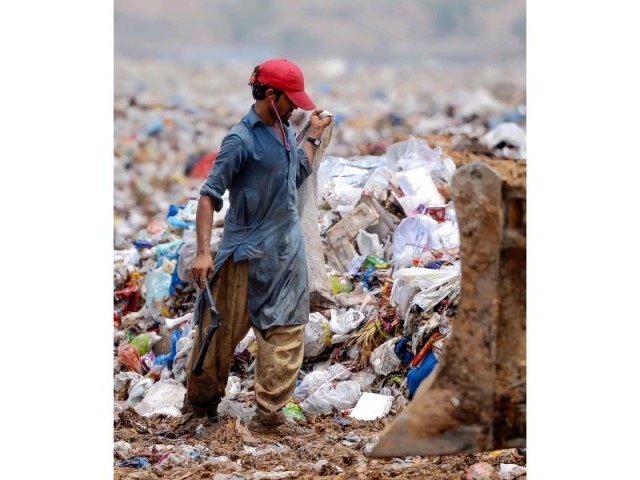 A rag-picker collects recyclable materials at a garbage dump in Islamabad. PHOTO: AFP

ISLAMABAD: The past 20 years have seen the population of the capital more than doubled. This has seen a corresponding rise in commercial activity and the use of shopping bags and other single-use plastic goods.

According to the UN, around a million plastic drinking bottles are purchased every minute around the world, while up to five trillion single-use plastic bags are used worldwide every year —half of which are designed to be used only once and then thrown away.

Of the world’s rivers, 10 carry more than 90 per cent of the plastic waste which ends up in the oceans.

China’s Yangtze River leads with 1.467 million tonnes while the Indus River in Pakistan is second with 164,332 tonnes and the Yellow River in China is third with 124,249 tonnes.

In Pakistan like elsewhere, the municipal authorities and the environmental regulatory bodies have failed to enforce their respective regulations to stop the dumping of garbage on such a mass scale into the rivers.

To tackle the issue, many countries in Asia, Europe and the US have somewhat controlled the disposal of plastic waste by introducing oxo-biodegradable plastics along with some biodegradable shopping bags. But there is no mechanism to test the environmental-friendly tags of these products.

“The technology is simple which neither requires alteration by machinery nor process: a small Olefin-based additive is mixed with the raw material (plastic granules) to develop biodegradable properties in plastic and bags made with this technology — if left in the open air or in water —gradually weaken and vanish, leaving behind humus (a non-toxic product),” an EPA official explained the principle behind the oxo-biodegradable plastics.

According to a recent global survey, only nine per cent of all plastic waste ever produced has been recycled while a further 12 per cent has been incinerated. This still leaves 79 per cent of plastic waste which has accumulated in landfills, dumps or natural environment.

To tackle this issue, a group of researchers at the Quaid-i-Azam University (QAU) in the capital have spent the past decade studying and exploring the potential of microorganisms, such as bacteria and fungi, in degrading synthetic plastics like polyvinyl chloride, polystyrene and polyethene.

The research work is focused on isolation, screening and molecular characterisation of plastics, degrading indigenous microbial isolates and to evaluate their degradation potential through different techniques.

World Earth Day: Give up use of plastic and save the environment

“Our group is investigating fungal enzymes, particularly peroxidases, which are a key class of enzymes having extensive commercial applications in delignification of lignocellulosic materials, elimination of recalcitrant organic pollutants and enzyme-catalyzed polymerization,” said Dr Ishtiaq, the head of QAU’s Microbiology Department.

He added that adding that they had successfully conducted molecular characterisation of fungal enzymes (peroxidases) responsible for degradation of plastics. “We successfully produced, purified and tested fungal enzyme (Lignin Peroxidase and manganese Peroxidase) having the potential for oxidation of complex polymeric substrates. Scanning Electron Microscopy and Fourier Transform Infra-Red analysis of polymer surface proved the proposed involvement of this enzyme for polymer degradation under optimized conditions,” he said.