IG put on notice for water theft in Keti Bandar­
By Our Correspondent
Published: May 9, 2018
Tweet Email 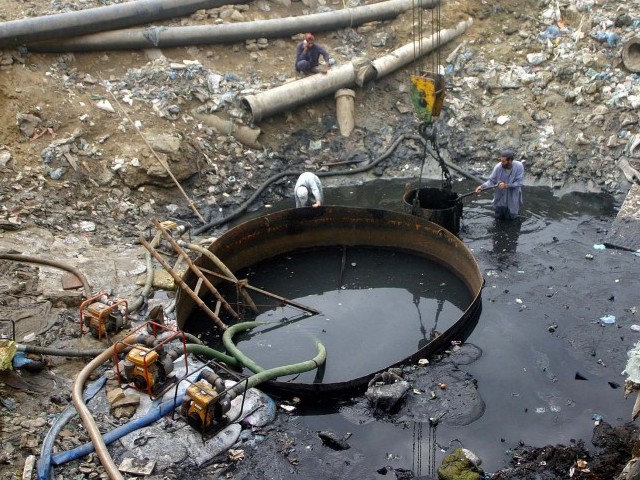 KARACHI: The judicial commission on water and sanitation put on Tuesday Sindh Inspector-General of Police Allah Dino Khowaja on notice regarding the theft of water from canals in the Keti Bandar area. The commission also directed the initiation of legal action against police officers who had refused to register a case against the water theft.

The judicial commission also issued a show cause notice to the Karachi Water and Sewerage Board (KWSB) managing director (MD) for not posting complaints about water shortage and details of pumping stations on the website. The commission’s head, Justice (retd) Amir Hani Muslim, told the water board’s management not to test the commission’s patience and that any negligence of its orders will not be tolerated.

Karachi Mayor Wasim Akhtar and representatives of various authorities attended the hearing. Reprimanding the authorities concerned, Justice (retd) Muslim said some officer needed to be sent to jail so that the authorities might start taking their work seriously.

The commission expressed anger over trash accumulated along the coast of Karachi. Justice (retd) Muslim observed that the Defence Housing Authority (DHA) was responsible for the discharge of sewage into the sea which had polluted the coast and marred the picnic sites. The commission asked a law officer representing the DHA whether the DHA management bothered to go to the Sea View. People go there for picnic, yet, it does not resemble anything like a seaside place, the commission remarked.

The law officer expressed his lack of knowledge in this regard, to which the commission asked him why he was present before the commission. A citizen informed the judicial commission that the sea was being polluted with sewage which was also damaging marine life.

The DHA requested the commission to grant a one-week time to resolve the issue. Approving the request, the judicial commission warned that if the issue was not resolved by May 15, it would pass strict orders. The commission directed Dr Murtaza to collect water samples from places where polluted water was being discharged into the sea.

Justice (retd) Muslim was also angered by construction rubble choking a drain in Empress Market. Your contractor has blocked the entire drain, the commission told the mayor, to which he replied that he was not aware of the issue and would look into it. He assured the commission that the clogged drain would be cleared in a day.

Akhtar informed the commission that 36 drains had been identified in the city that required renovation. Work on those drains will commence in 15 days, the commission was informed. Justice (retd) Muslim pointed out that many drains had been encroached upon. He also directed that work on drains should not be affected in Ramazan.

The commission reminded the mayor of the promise he made to the Supreme Court, according to which work on drains had to be started as soon as possible. You are still engaged in formalities, the commission remarked, asking what would happen to the city once the monsoons started.

The commission refused to accept all excuses that were made for the delay. It remarked that someone should take the responsibility for this. The commission asked who allowed encroachments on Saddar again once they were removed, to which the mayor said everyone knew who was to blame. The commission showed the mayor pictures of police officers taking bribe from vendors to allow them to set up their shops on streets and footpaths. The commission directed that the pictures be sent to the SSP concerned.

Justice (retd) Muslim observed that the Sindh Building Control Authority (SBCA) was also involved in the disposal of construction debris on footpaths. Reproaching the SBCA director-general (DG), the commission remarked that big projects were completed but their debris was left on the roads. The DG informed the commission that the authority was collecting debris in 18 towns, however, the commission was not placated. Is the SBCA sleeping on the matter, it asked.

The issue of water theft from canals in the Keti Bandar area was also heard by the commission. Irrigation Secretary Jamal Mustafa said that massive irregularities had surfaced in this regard. He informed the commission that water was being stolen from seven points.

No approval for housing schemes in Sindh without civic agencies’ NOCs

Not a penny has been spent to provide relief to people, the commission remarked, adding that the authorities had turned every serious matter into a joke.

The KWSB informed the commission that it was collecting relevant data, to which the commission asked whether data was being collected in London which was the reason it was taking so long. The commission directed the KWSB MD to update the board’s website in two weeks.

Vacant CII seats to have more experts than scholars