As part of the Green Line BRT projec­t, statio­n will be used by all BRT lines
By Oonib Azam
Published: June 4, 2018
Tweet Email 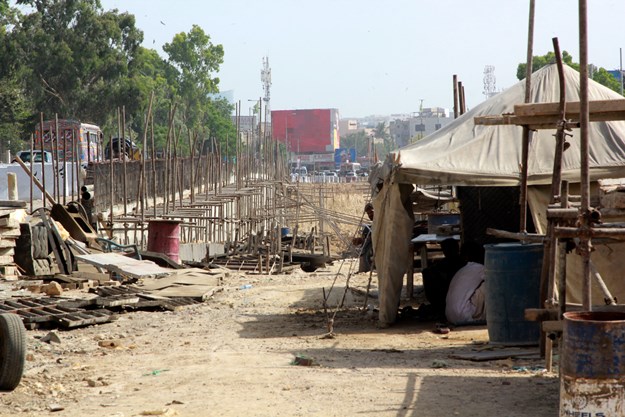 KARACHI: The city’s Numaish intersection area will undergo massive reconstruction as two-floor deep excavation will be carried out for the construction of a first-of-its-kind in South Asia underground bus station with a mezzanine floor for the operation of the mass transit system.

The Karachi Infrastructure and Development Company Limited (KIDCL), which is responsible for the construction of the Green Line Bus Rapid Transit (BRT) project in the port city on behalf of the federal government, will undertake the construction work.

There will be two floor underpasses at Numaish, where five BRT lines are supposed to be integrated. On the intermediate mezzanine floor there will be space for passengers to sit, rest and shop, while bus operations will be carried out on the lower floor.

The construction of the underpass has been halted for the past 10 months due to some major changes in its design. Crossing Gurumandir and Numaish is nothing less than a nightmare for commuters these days as the entire area has been dug up and no proper diversions have been provided by the authorities to facilitate traffic.

Construction of Green Line underpass has become a traffic nightmare

The underpass for the federal government-funded Green Line BRT project, which should have been completed by now, is currently under construction in the area. However, lack of coordination, ill-planning and red tape on the part of the Sindh government has halted construction work.

The Green Line BRT is being constructed with the federal government’s funds all the way from Surjani Town till Tower. Initially, it was supposed to be constructed till Gurumandir, but in 2017 it was extended till Numaish and later till Tower.

After feasibility studies were carried out, the underpass was dug up in August, 2017 at Numaish to provide a segregated corridor for the Green Line. In October, 2017 the construction work halted because the Asian Development Bank (ADB)-funded Red Line BRT from Safoora to Numaish had to be integrated in the Green Line’s track at Numaish.

“Once the construction work kicked off, the ADB informed us that the Red Line would come from Sharae Quaideen and will enter the underpass from Numaish in front of Jinnah’s mausoleum,” an official of the Sindh government told The Express Tribune. “For this purpose, they wanted an opening on both the left and right sides of the underpass.”

The Yellow Line BRT, which will be coming all the way from Korangi, will also enter the same underpass. “There will be an opening for the Red and Yellow line BRTs from the median on Sharae Quaideen to enter the underpass at Numaish,” KIDCL Chief Financial Officer Zubair Channa explained, adding that around 300,000 square feet would be excavated at Numaish.

In the future, he said that the Karachi Goan Association (KGA) ground, which is approximately of seven acres on MA Jinnah Road, would be obtained and excavated and a staging facility of around 100 BRT buses would be constructed underground. An underground connection would be given for the BRT buses to park there. Later, he said that the ground would be rebuilt for the association.

A tunnel with a length of 440 metres would be constructed which would end just short of Capri Cinema. An underground rotary would be constructed before the cinema with a radius of 28m for buses wanting to turn back. Inside the underpass, 25 big buses of 18m length can be parked. “Docking spaces for the buses are available on both sides,” Channa explained, adding that the underpass will be 28.4m wide with three lanes on each side.

One lane will be the main lane which buses will use, the second will be the passing lane and the third lane will be 3.5m wide and for parking. Passengers will be able to enter the underpass using an escalator that will be constructed at the footpath where the JDC camp is situated at Numaish.

Sindh’s transport projects are on the road to nowhere

On the mezzanine floor, Channa said that commercial activities will take place and space for passengers will be provided where they can sit, relax and wait for their buses. “The Sindh government can earn between Rs60 and Rs65 million monthly through that commercial activity,” he said. The initial cost of the underpass was Rs800 million but it will now be increased to Rs2.4 billion. The cost of the mezzanine floor will be Rs1.17 million.

There will be electrical, mechanical, heat ventilation and air conditioning systems along with a firefighting system of around Rs850 million, the cost for which would be borne by the Sindh government, according to Channa.

For the diversion, he explained that Nishtar and Khurasan roads would be constructed properly and encroachments in the area would be removed. The KGA Ground on MA Jinnah Road can be temporarily acquired for a traffic diversion, he said.

The Sindh chief minister has already approved the design for a multi-storey underground bus station to be constructed at the Numaish intersection as the central point of the BRT System Green Line project.

‘One person dies from tobacco consumption every five seconds’