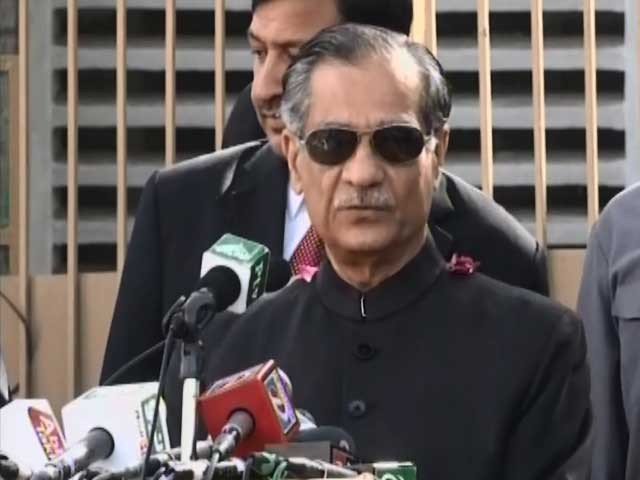 LAHORE: Chief Justice of Pakistan Mian Saqib Nisar on Friday dispelled any impression of delay in holding the upcoming general elections scheduled for July 25 and said “no one should have doubts in this regard”.

“General elections will be held on July 25 and we will not allow any delay no matter what,” the chief justice remarked.

He was heading a two-member bench seized with the petition filed by Workers Party seeking implementation of the code of conduct issued by the ECP at the Supreme Court’s Lahore Registry.

“There should be no doubt about holding the general elections on time,” the chief justice added

Counsel for the petitioner Advocate Bilal Hassan Minto prayed the court to issue appropriate directive to implement the election code.

The court issued notice to the ECP and put off further hearing until June 4.

Chief Justice of Pakistan (CJP) Mian Saqib Nisar lashed out at the outgoing federal cabinet for not devising any course of action to proceed against accused army officers in the Asghar Khan case before completing its term.

“Before retreating from office, the federal cabinet merely constituted a subcommittee instead of carving out a plan to proceed in the case,” the chief justice remarked.

He expressed displeasure over the absence of Attorney General Ashtar Ausaf during the proceedings.

As the bench resumed hearing, the deputy attorney general stated that the federal cabinet took a positive decision on the implementation of the Asghar Khan case judgment.

CJP Nisar said that the attorney general should have come today in view of the importance of the case.

He lamented that the verdict had been lying for the last several year pending its implementation while the government paid no heed to it.

The chief justice adjourned the hearing for Saturday (today) and directed the attorney general to ensure his presence.

In the previous proceedings, the chief justice had directed the federal government to convene a meeting of the cabinet without any delay and take steps for the implementation of the judgment.

The CJP sought complete record of the luxury vehicles approved by the prime minister.

“The court will determine as to how and under what law the prime minister has given approval of the luxury cars’ use for cabinet members,” the CJP observed.

Following the court order, former federal law minister Zahid Hamid also appeared before the court and said that he had been using only one car with the approval of the federal cabinet.

However, Hamid said he did not know about the entitlement policy. A federal law officer said that 1800cc car was approved by the prime minister for the former law minister because of security reasons.

However, the law officer said that 30 luxury cars had been withdrawn in compliance with the court order.

At this, the chief justice directed the law officer to submit complete record of the cars approved for the cabinet members and put off further hearing till Saturday (today).