Says delays in electi­ons in FATA areas could affect the balanc­e of govern­ment
By Sohail Khattak
Published: May 31, 2018
Tweet Email 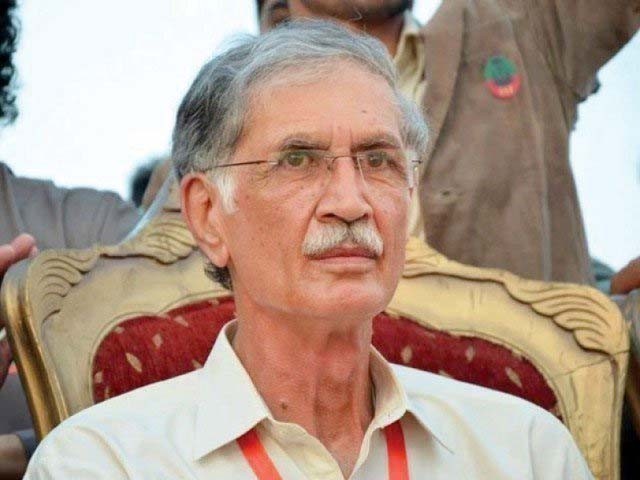 PESHAWAR   : The outgoing provincial chief minister has urged the top poll body to reconsider the timing of polls in the tribal belt which was recently merged with Khyber-Pakhtunkhwa.

Pervez Khattak has urged the Election Commission of Pakistan (ECP) to hold elections in the recently merged tribal areas at the same time as the rest of the country rather than delaying it for a year to avoid what he termed was “possible political uncertainty”.

In his letter, Khattak explains that the amendment to Article 106 of the constitution had changed the existing composition of the Khyber-Pakhtunkhwa (K-P) assembly, increasing the number of seats from 124 to 145 — the additional 21 seats coming from the newly merged areas of the Federally Administered Tribal Areas (Fata).

But with elections on the 21 general seats to be held within a year’s time after the general elections, the outgoing CM expressed concern that it will affect the composition of the government.

Khattak pointed out that historically, K-P has seen hung parliaments — a combination of multiple parties where none have clear majority and band together to form a coalition government.

If 21 seats are left unfilled during the general elections, they could have an impact on the complexion of the provincial assembly and hence the elected government, he argued, adding that there was a strong probability it could fuel political uncertainty in the province after the elections till the conclusions of elections in the tribal areas.

“Similarly, the holding of fair and transparent elections in the areas of Fata will be difficult during the incumbency of a political regime in the province,” he says, adding that the province needs political stability more than ever in the view of the paramount requirement and manifestation of 31st amendment in the Constitution.

“Any and every wrangling and instability will have negative imprints on the strategic gains and dividends achieved after the integration and merger of tribal areas in the province of K-P,” he said, adding that elections on the 21 seats at the same time were imperative to offer equal opportunity for participation in the elections of key government posts of assembly speaker, deputy speaker and the chief minister.

In the event elections in the Fata areas cannot be held on July 25, Khattak requested ECP should “kindly put in place a modality to preclude the possibility of any political instability in the province of K-P consequent upon the induction of a large number of members of provincial assembly to be elected subsequently, by tipping the balance against the party in power.”

Meanwhile, the Pakistan Tehreek-e-Insaf (PTI) central media department has issued a statement stating that Khattak’s letter had been written owing to the developing situation in the province and that being a chief executive of the province, he has the right to speak on the situation there.

“PTI is ready for general elections at any time and elections cannot be delayed for any reason including the merger of Fata in K-P,” the PTI spokesperson said, adding that the elections shall be held in a free and fair manner at its scheduled time.