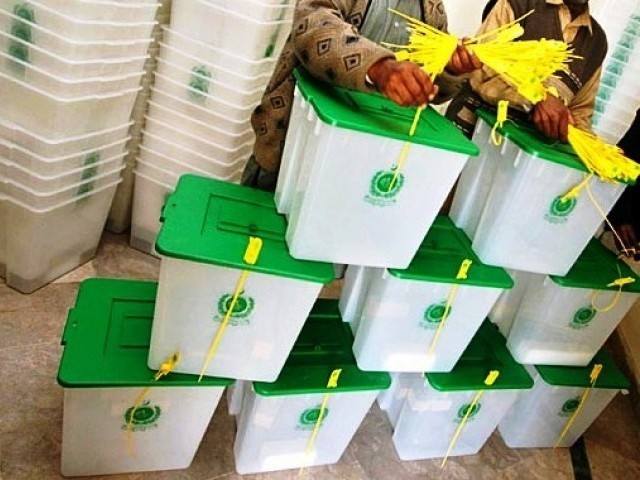 Armed forces are expected to provide security to ensure the smooth conduct of the general elections. PHOTO: ONLINE

KARACHI: The Election Commission of Pakistan (ECP) on Tuesday, in consultation with the Pakistan Army, finalised its security strategy for the July 25 general elections.

The armed forces are expected to provide security to ensure the smooth conduct of elections. The final security plan will be announced after a consensus with law enforcement agencies as well as caretaker authorities in federal and provincial governments.

Sources told Express News that the election commission will prioritise transparency and smooth conduct of polls to ensure the people vote in a free, independent and peaceful atmosphere.

According to sources, Pakistan Army may perform responsibilities as a rapid response force to ensure the secure conduct of general elections. Army personnel may also be stationed for securing logistics and printing of ballot papers by the election commission.

The ECP will send a formal request to the Ministry of Defence at General Headquarters (GHQ), sources revealed, adding that the decision for services by the forces will be made by the military high-ups.

Sources revealed that the military has already assured the ECP of its full cooperation. In addition, security for general elections will be ensured by police, rangers and other law enforcement agencies. Once announced, the security plan will be the joint responsibility of all stakeholders.

Former ECP secretary Kanwar Dilshad, while speaking to Express News, said Article 220 of the Constitution allows the electoral body to seek support from Pakistan Army during elections. “ECP has had support from the Army during various elections and by-elections,” Dilshad revealed, adding that the current polls may also see full-fledged services of the Army as per the security plan chalked out after deliberations between ECP, law enforcement agencies and caretaker governments.

In addition to the security plan, the ECP will only accept nomination papers for provincial and national assemblies after thorough scrutiny and fulfilment of requirements by the ticket holders. ECP will ensure that the nominees fully comply with all the conditions stated in Articles 62 and 63 of the Constitution.

A fully coordinated strategy will be chalked out in order to ensure that the elections are carried out in strict compliance with the code of conduct announced by the ECP. Strict action will be taken against political parties and independent candidates violating the given rules and code of conduct.