Action was taken after studen­ts leaked video of PAT secret­ary genera­l in which he was shouti­ng on them
By Our Correspondent
Published: May 28, 2018
Tweet Email 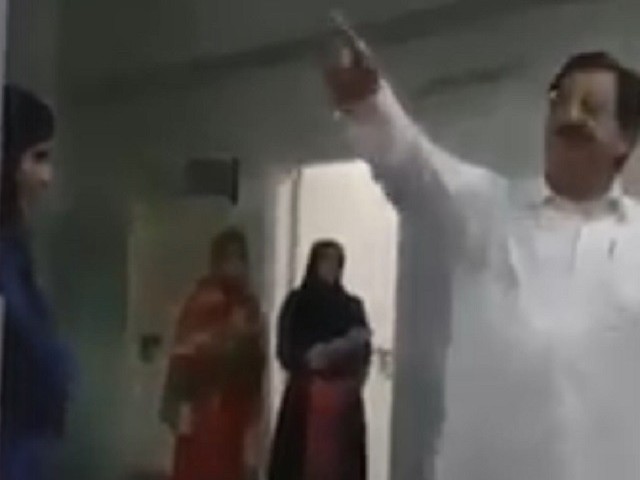 LAHORE: More than 320 female students of the Minhaj University were expelled from the hostel on Sunday for leaking a video of Pakistan Awami Tehreek (PAT) Secretary General Khurram Nawaz Gandapur where he was shouting on them.

Some students left the university hostel after PAT leader shouted at the students, whereas other students had been told to vacate the university. One student, who wished not to be named, said that the administration told them that they were now free to do whatever they want. They told us, “You wanted freedom, now you have freedom to do whatever you want,” said the student.

The incident came to the limelight when a video surfaced in which Gandapur was seen shouting and misbehaving with the female students in the girls’ hostel allegedly for protesting against the administration for not allowing them to attend an Iftar party outside the hostel.

In the video, girls could be seen trying to explain their ‘issue’ to Gandapur who angrily denied their pleas. He could also be seen threatened the students of dire consequences and telling the students to shut up repeatedly.

Gandapur could be heard saying, “You have not seen my other side. Have your parents not taught you any manners? Whoever raises a voice would be thrown out of the hostel.”

Later, while giving his side of the story, Gandapur told media that the girls were misbehaving with the hostel administration when they stopped them from attending the Iftar party outside the hostel. He said that according to the rules, no girl was allowed to leave the hostel after 6pm.  If anyone wanted to go outside after that time, she should be accompanied by a female staff member, he added.

Parents of the students on Sunday also held a press conference outside the Minhajul Quran Secretariat. They condemned the behavior of Gandapur and said that closing the hostel was not a wise decision and punishment should be given to those involved in any illegal activity.

They said that the administration should not play with the future of their children and the matter should be resolved by taking disciplinary action. They said that they had paid the entire fee at the time of the admission and also paid the remaining dues. They said that they were not involving in any politics and condemn the behavior of Gandapur and said that he should have shown respect to female students.

PAT Spokesperson Noorullah Siddiqui, in a statement, said that Gandapur was looking after the matters of the hostel out of goodwill as it was not his responsibility. The statement said, “He wanted to give foolproof protection to the girls.” The statement further said that providing hostel facility was not part of any of their project, it was provided only after the insistence of parents and the rules were made in consultation with the parents.

The statement also confirmed the closure of the hostels and said, “After last week’s incident, it is impossible to maintain discipline. Because of this, the administration has no other option other than to close the hostel,” the statement added.