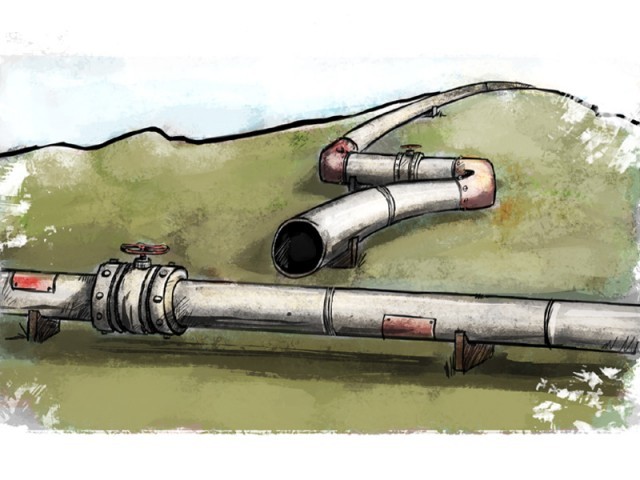 Iran has invited Pakistani investors to invest in the energy and petroleum sector in Iran. ILLUSTRATION: JAMAL KHURSHID

ISLAMABAD: Pakistan has witnessed unprecedented growth in the petroleum sector during the last five years under the outgoing government of the Pakistan Muslim League-Nawaz (PML-N) government, with phenomenal success rate in oil and gas exploration ventures, according to authentic data.
To step up search for oil and gas in potential areas across the country, the government encouraged oil and gas Exploration and Production (E&P) companies by providing maximum incentives.
Experts say the thrust produced satisfactory results.
The exploration activities registered 80 per cent increase with 40 per cent success rate. Drilling of appraisal and development wells went up by 12.8 per cent, discoveries rose by 151.3 per cent, 2D and 3D seismic surveys increased by 37.2 per cent and 43.1 per cent, respectively.
Consequently, domestic oil production grew by 29.8 per cent, meaning significant relief on the side of heavy oil import bill.

With CPEC, demand for petroleum products set to grow

A senior official in the Petroleum and Natural Resources Division told APP that during first four years of the PML-N government, the companies drilled over 179 exploratory and 194 appraisal wells that resulted in 101 new oil and gas discoveries, while the previous government had drilled 100 exploratory and 172 appraisal/development wells, achieving just 39 oil and gas discoveries.
In the four-year span, more than 944 million cubic feet per day (mmcfd) of gas and 32,343 bpd oil were added to the transmission network across the country through indigenous resources.
The country’s total crude oil production reached around 90,000 bpd oil.
The official said 68 findings, out of total 101 discoveries, had added proven reserves of about 5.4 trillion cubic feet (tcf) gas, while calculations regarding 33 wells were yet to be determined. As many as 87 findings were made in Sindh, seven each in Punjab and Khyber-Pakhtunkhwa.
During the same period, the country is estimated to have consumed about 5.2 tcf gas which means that more than 100 per cent replacement had been made for the resource consumed.

Besides, over $10 billion foreign investment poured into the country’s petroleum sector, despite low oil price scenario in the international market.
Determined to achieve self-sufficiency in the energy sector, the government also completed a study in collaboration with USAID which confirmed the presence of 3,778 tcf shale gas and 2,323 billion of stock tank barrels (BSTB) shale oil in place resources.
Following which, a Shale Gas and Oil Centre has been established at the ministry to facilitate interested E&P companies in tapping the identified 188 tcf gas and 58 BSTB oil technically recoverable resources in lower and middle Indus Basin.
Besides, a consortium of Oil and Gas Development Company Limited (OGDCL) and Pakistan Petroleum Limited (PPL) has been formed to undertake pilot project(s) to determine cost of extracting shale gas and oil.
In a landmark development, Pakistan signed a 15-year agreement with Qatar for import of LNG to meet its growing energy needs as existing natural gas reserves were insufficient to bridge the ever-increasing gap between demand and supply of the commodity.   The gas supply-demand gap has reached around 4 billion cubic feet per day (bcfd) as total gas demand of the country is 8.0 bcfd against total supply of 4.0 bcfd. Needless to say in winter, the demand rapidly increases.
It is believed that LNG was the cheapest alternative fuel and the only instant available remedy to meet the country’s energy needs when the existing natural gas reserves were diminishing.

With the import of LNG, the energy situation had improved across the country, including in Punjab where 40 per cent gas supply had reduced after the 18th Constitutional Amendment, the official said.
“The LNG greatly helped in meeting the country’s energy requirements as all gas-based power generation plants are now functioning fully, over 1,200 CNG stations restarted their operations, industrial and fertilizer sectors getting uninterrupted supply, which is not less than any miracle by any means,” he said.
Before LNG import, he said Pakistan was importing one million tons fertilizer per year and now it was exporting six million tons fertilizers, adding entire power generation sector was getting full gas supply, besides Nandipur power plant had also been converted on LNG.
The country set up two LNG terminals at Port Qasim in Karachi, which are injecting sufficient quantity of LNG in the national system to meet the existing energy demand, while more such facilities are being established in different areas, including at Gwadar deep-sea port.
Now, world’s major players are showing interest to invest in LNG sector of Pakistan by setting up their own terminals and developing transmission networks to supply the commodity to consumers, while the government wants to involve private sector in increased LNG-based activities.

In its strides to bridge the gap between demand and supply of gas, the government actively pursued Turkmenistan-Afghanistan-Pakistan-India (TAPI) and Iran-Pakistan (IP) gas pipeline projects.
The multi-billion dollar TAPI project has entered its practical phase in Pakistan after the process of initiating front-end-engineering-and-design (FEED), route survey was formally launched in Pakistan in March last year.
Commenting on Iran-Pakistan gas pipeline project, the official said the Petroleum Division has sought approval from the quarters concerned to negotiate amendment in in Gas Sale Purchase Agreement (GSPA) with Iran to execute the much-delayed gas pipeline project in the wake of international sanctions on the commodity supplier.
“Pakistan is committed to execution of the project. Due to international sanctions on Iran, Pakistan issued Force Majeure notice to Iran in March 2014 and proposed amendment in the GSPA enabling the parties to complete their respective sections of the pipelines within the extended period,” he added.
Giving a strategic overview, he said Pakistan was already working on laying a 42-inch diameter 700-kilometre gas pipeline from Gwadar to Nawabshah, and 1122 kilometres north-south (Karachi-Lahore) gas pipeline that could be used to supply the both regassified LNG and imported gas under IP and TAPI projects.
Similarly, Pakistan is moving fast towards achieving self-reliance in crude oil production after the government accelerated exploration of indigenous hydrocarbon resources over the last five years.
In June 2015, the Byco Petroleum Company had established the country’s largest production unit, having refining capacity of 120,000 bpd oil in Balochistan.
Trans-Asia, a private sector petroleum company is also planning to set up a refinery with the capacity to develop 100,000 bpd.
Recently, the government in a significant move to achieve autarky in the oil production sector, has given the task to Pakistan Arab Refinery Company to complete the much-delayed and abandoned multi-billion dollar Khalifa Coastal Oil Refinery project.
The coastal refinery will have the capacity to refine 250,000 bpd – equal to 13 million tons of petroleum products per year, he added.
Setting up of back-to-back oil refineries speaks about the present government’s seriousness towards resolving the energy crisis and achieving self-sufficiency in this sector.
Local as well as foreign investors, the official said, were reposing full confidence in prudent and business-friendly economic policies introduced by the present government and making huge investments in the energy sector.
Presently, as many as six oil refineries are operating in the country and they have full capacity to refine the product as per needs of the country. However, a lot of work is yet to be done in the exploration sector to achieve autarky.