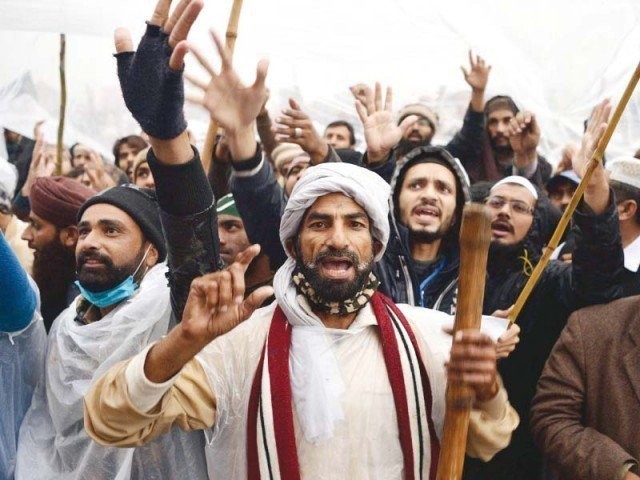 ISLAMABAD: The defence ministry has rejected notion that the Inter-Services Intelligence (ISI) was behind the 2017 Faizabad sit-in

“Conspiracy theories were woven on social media and given credence by irresponsible remarks of those at influential positions. False impression was created that ISI was behind the protest and fake stories were created that ISI was sustaining the protesters. In reality, the intelligence agency made every effort to support the government in peaceful resolution of the issue,” says the report submitted by the defence ministry in the Islamabad High Court.

The report says the Faizabad sit-in was triggered by amendments in the Election Act and the subsequently delay in their reversal.

In another damning indictment, the report claimed that the ‘rhetoric of political leadership’ was responsible for aggravating controversy surrounding amendments to the Election Act which triggered the protests.

“Matter was further intensified by rhetoric of political leadership, wherein senior politicians demanded probe and action against those responsible for these amendments. Same analogy was forwarded by the protesters who demanded that those responsible for initiating the changes must be identified and punished,” says the eight-page report

It is also submitted that the government and Tehreek-e-Labbaik (TLYR) did not formally engage in discussions, although both parties wanted to inquire and act against those responsible for changes to the Act. According to the report, botched operation against the protesters was caused by a lack of coordination between members of Rawalpindi and Islamabad police, who lacked a unified chain of command, and were ‘poorly equipped’ to deal with rioters.

Furthermore, the Ministry of Defence highlighted that fallout of the failed operation, wherein all major cities and vital communication arteries were blocked and government officials were attacked, played a major role in determining terms of the eventual agreement between the protesters and the state on November 27, 2017.

The defence ministry also recommended the court to summon TLYR leaders to explain the manner in which they acted and spoke during the whole episode. Earlier, the ISI had submitted a comprehensive report in the SC, wherein it is stated that the ISI had recommended that the federal government must avoid use of force and resolve the issue peacefully through talks with TLYR.

“Despite ISI’s recommendations to solve the issue politically and avoid the use of force, an operation against the sit-in was launched on November 25, 2017 on orders of the IHC. The operation was an utter failure [and] triggered countrywide protests.” The report also says that local police were neither willing nor capable of obstructing or preventing the logistic supplies.

The report also added that live media coverage of the operation as well as social media resulted in mobilisation not only in the twin cities but across the country as well. It also says that religious sentiments of police personnel were exploited by TLYR leadership through their continuous speeches on loudspeakers.