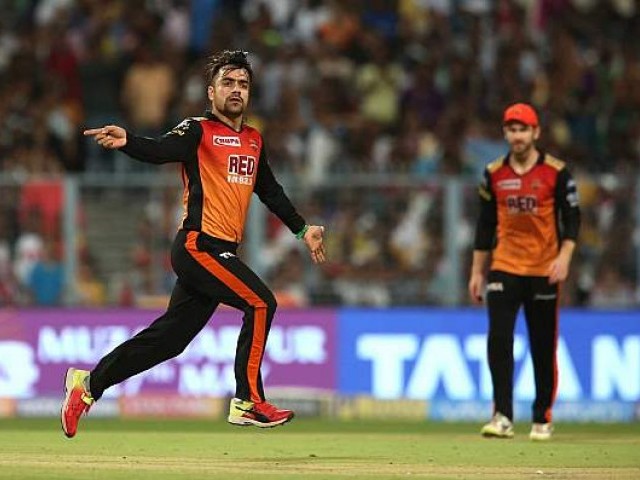 CHARISMATIC OPERATOR: After a string of brilliant performances in India's cash-rich Twenty20 league, Rashid Khan will be in the spotlight as the Sunrisers seek a second title against Mahendra Singh Dhoni's Super Kings. PHOTO COURTESY: BCCI

After a string of brilliant performances in India’s cash-rich Twenty20 league, the 19-year-old will be in the spotlight as the Sunrisers seek a second title — and a $4-million prize — against Mahendra Singh Dhoni’s Super Kings.

Khan’s spin bowling has made him one of the hottest properties in cricket over the past year. But he has shown in the IPL this year that he can bat too.

His 10-ball 34 and three crucial wickets set up the Sunrisers’ semi-final win over the Kolkata Knight Riders on Friday.

New Zealand’s Kane Williamson, a last-minute replacement for scandal-tainted David Warner as the Sunrisers’ captain, said Khan would be vital in the final.

“He was brilliant but he’s got another game, so we’re going to keep him… under wraps,” Williamson said after Friday’s win in Kolkata. “He’s had a great season for us. Now it is important we move on and focus on the final.”

Khan, who was bought by the Sunrisers for $1.32 million at the January auction, has proved his worth by claiming 21 wickets in 16 matches and with vital tail-end batting contributions.

“I wouldn’t hesitate in saying he is the best spinner in the world in this format… (and) he’s got some batting skills as well,” Indian batting legend Sachin Tendulkar wrote on Twitter.

Khan and the Sunrisers will now face a side who have beaten them three times in this year’s competition.

Two-time champions Super Kings, who with the Rajasthan Royals returned this season after a two-year corruption ban, have won 10 of their 15 games.

Veterans Dhoni, Dwayne Bravo and Faf du Plessis have rallied Chennai in crunch games to give them a shot at their third title — a feat only achieved by the Mumbai Indians.

“It’s nice we have so many experienced players to rely on. Chennai’s been to seven, eight finals, so we have the experience of big games,” du Plessis said after his unbeaten 67 helped the Super Kings beat the Sunrisers in the first knockout match. “MS (Dhoni) understands what to ask of the players. We’re playing our best cricket at the moment.”

IPL organisers are predicting a television audience of several hundred million for at least part of final, which will be played in Mumbai.