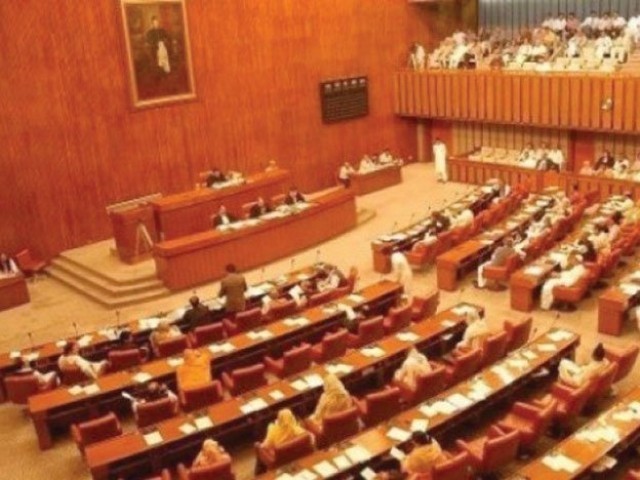 ISLAMABAD: A day after the National Assembly passed the historic 31st Amendment Bill, paving the way for the merger of Federally Administered Tribal Areas (Fata) with Khyber-Pakhtunkhwa, the Senate on Friday endorsed the bill and passed it with a significant majority.

During voting, 71 Upper House members voted in favour while five Senators from the Pakhtunkhwa Milli Awami Party (PkMAP) opposed it. The bill needed a total of 69 votes to pass. PkMAP Senators also staged a walkout.

After getting approval from both houses of the Parliament, the bill will now be presented before the K-P assembly.

Taking the floor, senior Pakistan Peoples Party (PPP) leader Raza Rabbani claimed the lawmakers did not act on their own in terms of the reforms bill, rather they acted as ‘puppets’. “Although it is a positive step, it would have been better if the initiative had been taken by the Parliament.”

“We had proposed reforms in 2009 through the office of then President Asif Ali Zardari but we were stopped.”

Reflecting on the recent commotion over a separate province in Sindh, Rabbani warned that even though the Lower House of the Parliament had asserted that the 31st Amendment Bill shall lead to more administrative units, “division of provinces on the basis of administrative needs will not be allowed.”

“Every province has a heritage, language, culture and history – a new province will not be allowed without the presence of such ingredients.”

Contradicting Rabbani’s statement that the parliament was acting on ‘directives’ instead of relying on itself, Leader of the Opposition Sherry Rehman said: “At least PPP has its own history and struggle to prove otherwise.”

Rehman maintained that the first committee on Fata was constituted by Zulfikar Ali Bhutto. “Benazir Bhutto even moved the top court for the rights of the people of the tribal areas.”

Voting in favour of the bill, Muttahida Qaumi Movement-Pakistan (MQM-P) senator Barrister Saif pointed out that certain articles had been circumvented.

Jamaat-e-Islami (JI) Chief Sirajul Haq stressed that the merger will strengthen K-P with additional representation in the Parliament. Condemning the Frontier Crimes Regulations (FCR), he said a British officer had termed the law “worst”.

Opposing the bill, JUI-F’s Ghafoor Hyderi said there was no logic in the decision. “Since the matter is about the people of Fata and their identity, they should have been asked what they wanted. There were three better options: separate province, repealing of FCR or a council system.”

Meanwhile, PkMAP’s Usman Kakar alleged that the bill was passed in a hurry due to the uncertainty of the upcoming general polls. “I can guarantee that elections will not be taking place.”

Ahead of the Senate session, PPP parliamentary committee reviewed its strategy on the reforms bill for Fata. Rehman, while chairing the meeting, directed all party Senators to ensure their presence in the Upper House of the Parliament. The meeting was attended by Senators including Raza Rabbani, Rehman Malik, Sassi Palejo, Maula Baksh Chandio, Rubina Khalid, Krishna Kumari and others.

Stressing on the importance of mainstreaming of the tribal areas, Faisal said PTI will play its role to ensure the approval of the constitutional bill.

The much-hyped bill was approved by the National Assembly on Thursday with 229 parliamentarians voting in favour while only one opposed it. Aimed to speedup mainstreaming of the tribal areas, the bill also includes K-P, Fata merger within two years despite staunch opposition from two of Pakistan Muslim League-Nawaz’s (PML-N)’s strongest allies – JUI-F and PkMAP.

Both the parties staged a walk-out when the resolution to table the bill was approved.

The draft bill seeks to amend seven articles in the Constitution of Pakistan to allow implementation of proposed reforms. It seeks to omit paragraph C of sub-clause 2 of Article 1 under which Fata is placed as separate territory of the country like the four provinces. The omission will allow the tribal areas to merge with territory of K-P.

The bill proposes amending clause 1 of Article 51 by reducing the number of seats in the National Assembly from 342 to 326. It adds clause 3A after clause 3 to give legal cover to representatives who will be elected from Fata in the general polls 2018. They will continue as member of the National Assembly till expiry of their five-year-term and after the five years, this new clause will stand omitted.

It also seeks removal of the word “Federally Administered Tribal Areas,” from the clause 5, under which seats of the National Assembly are allocated on population bases, and from sub-clause 1 of Article 155 which deals with the complaints and interferences with water supplies.

The draft pursues changes in Article 59, which deals with Senate, by reducing the number of Senate members from 104 to 96. It omits the sub-clause (b) of clause 1 that allocated eight members to the tribal areas.  It will also delete the sub-clause (b) of clause 3 of the same article which states that four senators elected from Fata shall retire after three years while another four after next three years.

Furthermore, it seeks omission of the word “Federally Administered Tribal Areas” from its sub-clauses (b) and (f) of Article 272 which defines the constitution of Senate.

It proposes omitting clause C of Article 246 which defines and names Fata and seeks addition of clause D which states that laws applicable in these areas will remain applicable until repealed or changed by competent authority.

Under Article 247, the competent authority will be the federal government until after the elections when the jurisdiction for altering and repealing the laws prevailing in these areas will be passed to the assembly.