ISLAMABAD: In a ‘historic’ move, the National Assembly on Thursday voted in favour of a constitutional amendment to merge the Federally Administered Tribal Areas (Fata) with Khyber-Pakhtunkhwa (K-P).

All major political parties supported the bill, with 229 lawmakers voting in its favour and only one voting against it. The constitutional amendment needed support of a two-thirds majority or 228 members and the house managed to get it through after five hours of discussion by barely mustering the required support.

Two allies of the ruling party, the Jamiat Ulema-e-Islam-Fazl (JUI-F) and the Pashtunkhwa Milli Awami Party (PkMAP), and an independent member from Fata opposed the bill and walked out during the voting. An ousted lawmaker of Pakistan Tehreek-e-Insaf (PTI) Dawar Kundi also voted against the bill.

The highlight of the day was presence of over 200 lawmakers in the house after over six months. The NA had lately witnessed adjournments due to lack of quorum and poor turnout on the treasury benches. The PTI’s chief Imran Khan showed up in the house for the 20th time out of 488 sittings since June 2013.

Opponents to the bill claimed it was denying the people of Fata their right to decide their own fate and demanded that a referendum be conducted in the tribal areas in this regard.  They termed the amendment a disaster and warned that it would haunt the country in the days to come.

The bill seeks reduction in number of the Senate seats from 104 to 96 members as Fata will no longer have separate representation after the merger but for now they will continue till expiry of their respective terms in office. Hence half of the existing eight senators would retire in 2021 and the remaining four in 2024 and thereafter there would be no separate representation for Fata in the Senate.

Elections to the aforesaid seats would be held within one year after the general elections 2018. The bill also amends Article 246 of the Constitution that seeks to merge areas of Provincially Administered Tribal Areas (Pata) in Balochistan and K-P.

The bill has also exclusively repealed Article 247 that places the tribal areas under the ambit of president of Pakistan. Under the new amendment the name of Fata as a separate entity from the country’s four existing provinces will be removed.

The Senate’s session is likely to take up the bill on Friday to discuss and probably approve the bill. Later it will have to be tabled before the KP assembly where again a two-thirds majority has to approve it prior to the dissolution of current provincial governments.

The PM congratulated all the parties for their support on the passage of bill.  “We need trust of people of Fata and bring them on a par with other parts of the country which is their right to have roads, health and other facilities the rest of Pakistan is enjoying,” he said.

Earlier, the PTI chief Imran Khan congratulated all the members on the passage of bill and said time would prove it a very good decision, as, according to him, there were great anomalies because only 40 laws of Pakistan were implementable in Fata.

He said that there was a vacuum as the old system has ended and new system is not in place and external forces could have taken advantage of it. “There is a looming danger that foreign forces would be using it,” he said, adding, “Despite being Pakistanis, the people of Fata had no voice.”

Khan said the bill would address their grievances to a great extent besides removing the anomaly.    However, he said that there are challenges as it would take some time to implement the country’s laws adding that the process should be done in phases as there was no proper infrastructure in place.

He suggested that a committee should constantly sit and discuss the issues that may be faced in implementation of this bill. The PPP leader Naveed Qamar said it was matter of satisfaction that a colonial system was eliminated from the country.

He thanked all the parties that worked together, saying that despite difference almost all the parties came on same page as far as the bill is concerned.    He said this was not only the bill of merger but it had virtually eliminated the differences, which were created between Fata and rest of the country.

The PTI’s Shah Mehmood Qureshi also thanked the parliament for playing their due role in passing the bill.  Sahibzada Tariqullah of the Jamaat-e-Islami also congratulated the parliament, specially the prime minister for resolving the old issues of tribal areas after 70 years.

The National Assembly also passed the Evening Courts Act, 2017 bill, which aims at dispensing speedy justice to the people. The bill proposes to notify some courts as evening courts to decide certain specified categories of civil and criminal cases to help clear the backlog of cases. 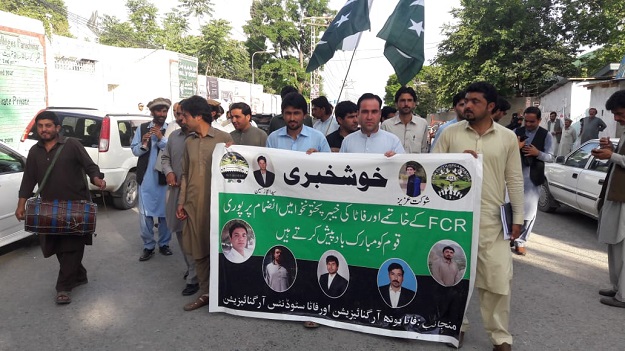 The bill was moved by Minister for Defence Khurram Dastgir Khan.