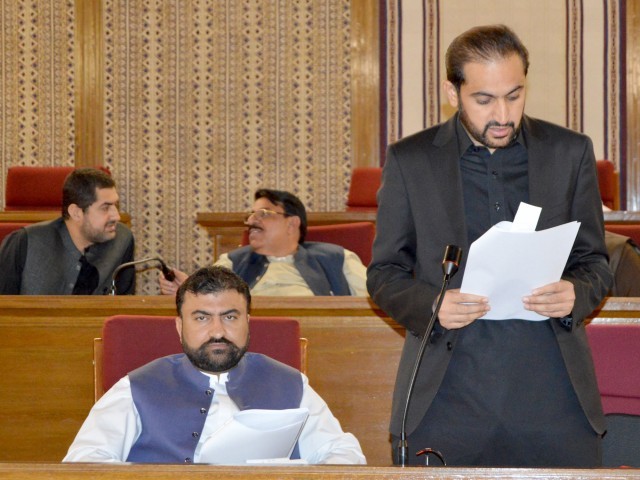 QUETTA: After a simmering debate, the Balochistan Assembly on Monday approved the provincial budget for fiscal year 2018-19 with revised allocations for development and non-development projects.

As Adviser to the Balochistan Chief Minister (CM) on Finance Ruqayya Saeed Hashmi tendered her resignation over the misbehaviour of opposition members on Sunday, CM Abdul Quddus Bizenjo, acting as the finance minister, presented the supplementary budget.

The total budget for FY2018-19 stands at Rs352.3 billion of which Rs288.3 billion has been allocated for development and non-development projects.

However, the opposition benches that created a racket in the assembly for not being consulted while allocating funds for various districts and projects in the budget, have termed the budget based on “favouritism”.

“The provincial government appreciates all parties, including JUI-F, NP, BNP- Mengal and others, that fully supported us in finalising the budget,” said the chief minister. “We are democratic people and must pursue democratic values in our assembly.”

However, Bizenjo did not mention the name of Pashtoonkhwa Milli Awami Party (PkMAP) as its MPAs had a couple of days ago used abusive language against a fellow MPA Shahida Rauf while she was chairing the budget session.

The membership of the four PKMAP MPAs has been suspended over their irrational behaviour.

Balochistan postpones budget announcement until May 14

Further, Bizenjo also announced bonus for the staff of the provincial assembly, who helped in preparing the budget.

The provincial government also decided to expedite the performance of the Balochistan Revenue Authority in order to collect more taxes to cover the budget deficit of around Rs62 billion.

Of the total PSDP funds, it has also allocated the highest amount of Rs20.19 billion for the communications sector’s 925 schemes, including 567 new ones.

Further, JUI-F’s Mufti Gulab staged a walkout from the assembly session in order to record his protest against shifting of new dams’ schemes to PB-19 from PB-18.

On demand for releasing the salaries of the security staff of MPAs, Speaker Rahila requested the chief minister and Minister for Home Sarfraz Bugti to address the issue.

“Dozens of security employees are deprived of their salaries due to the absence of one signature. The issue should be resolved on priority basis,” she added.

Replying to the speaker, Bugti said, “A summary has been sent to the finance department. The Balochistan CM is the head of the department and will direct the finance secretary to release their salaries.”

World Fistula Day: 135 women diagnosed with fistula in a year