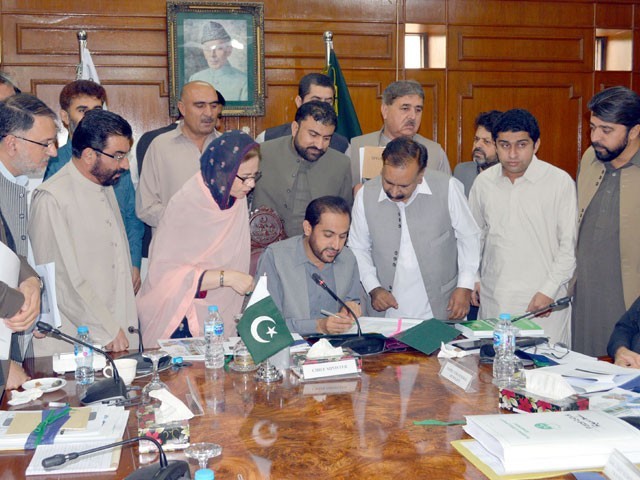 The current budget is Rs23.8 billion or 7.24 per cent higher than the previous fiscal’s budget of Rs328.5 billion.

Likewise, the current PSDP is 2% higher than the previous fiscal’s Rs86 billion.

The budget is a deficit one as about Rs290 billion will be provided by the Centre, while the remaining amount of Rs62 billion will have to be arranged by the provincial government through taxes and loans. However, it is necessary to note that Balochistan is a tax-free zone and the government will have to opt for loans from the State Bank of Pakistan to meet the requirements.

Despite heaps of garbage across city, solid waste budget slashed

Presenting the budget in the Balochistan Assembly, Adviser to Chief Minister on Finance Ruqayya Saeed Hashmi said, “The present government wanted to allocate maximum amount of funds for the development sector in order to provide more facilities to the people of the province at their doorstep, but resources from the federal government are not according to the needs of the province.”
The CM adviser said the Rs88.3 billion PSDP includes Rs9.2 billion in foreign assistance.

Hashmi said a total of 4,728 development projects are included in the PSDP 2018-19 of which 3,213 schemes are new while 1,515 schemes were ongoing.
Hashmi said the government tried to include collective-nature schemes in the next fiscal year’s budget for the benefit of the people, adding that with the measures taken by the provincial government the provincial resources were estimated at Rs9.6 billion during the financial year 2017.18.

She said that the Balochistan government established Balochistan Revenue Authority, which collected Rs5.5 billion taxes under the head of general sales tax on services. However, The BRA was established last year and is not fully functional, according to sources.
According to budget documents, the Balochistan government has allocated the highest amount of Rs20.19 billion for the communication sector’s 925 schemes, including 567 new schemes and 358 ongoing.

The budget documents showed Rs8.64 billion outlay for Public Health Engineering sector which will be spent on a total of 1,009 development schemes, including 921 new ones and 88 ongoing.
The provincial government decided to give more attention to the health sector in order to provide maximum health facilities to the people of Balochistan and has allocated Rs7.24 billion for initiation of 172 new development schemes and completion of 100 ongoing schemes.

The provincial government will also spend an amount of Rs2.26 billion on local bodies’ projects.
For the power sector’s 269 development schemes, Rs2.7 billion has been allocated.

It is important to mention that Rs10 billion had been allocated in the previous budget 2017-18 for the establishment of Balochistan Bank, but till date not even a foundation stone has been laid.

In the line of duty: journalist tortured by hospital guards