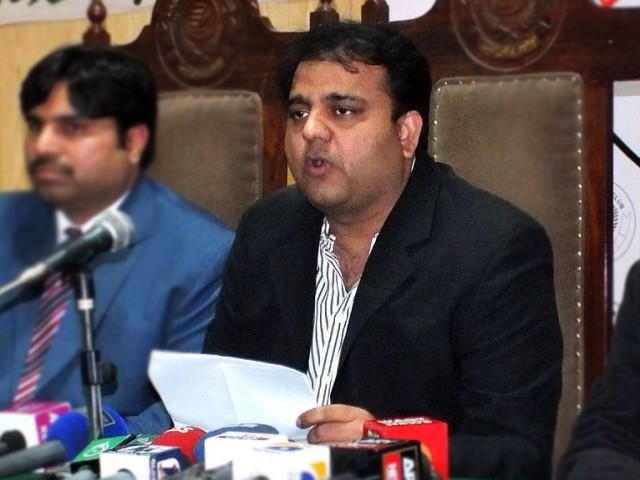 ISLAMABAD: The Pakistan Tehreek-e-Insaf (PTI) on Monday rejected two of the names proposed by the main opposition party, the Pakistan Peoples Party (PPP), to Prime Minister Shahid Khaqan Abbasi for the slot of caretaker prime minster.

The PPP has put forth names of former chairman of Pakistan Cricket Board Zaka Ashraf and former foreign secretary Jalil Abbas Jilani for the top interim post.

“The PTI outright rejects the name of Zaka Ashraf due to his close association with PPP co-chairman Asif Ali Zardari,” PTI spokesperson Fawad Chaudhry said while addressing a press conference on Monday.

He said Ashraf was an integral part of the PPP and a member of the party’s central executive committee, adding that he was also stated to be one of the main financiers of the PPP co-chairman. Ashraf was also responsible for looking after the PPP’s affairs in South Punjab, he claimed.

Talking about Jalil Abbas Jilani, Chaudhry said he was a seasoned bureaucrat but not as good and neutral as the PTI’s nominees.

“Our objection to the nomination of Mr Jilani is not as strong as to that of Zaka Ashraf, but we think the PTI’s nominees are more suitable. The PTI-suggested names should be considered for a fair electoral process,” he urged.

He said it was beyond logic why the PPP was refusing the name of Tassaduq Hussain Jillani “who enjoys uncontroversial background and is respected for his integrity at the highest level”.

No delay in polls

The PTI spokesperson said his party did not want even a slight delay in the next general election “which should be held according to the schedule announced by the Election Commission of Pakistan”. He said the PTI was fully prepared for the election.

He refuted media reports about the PTI’s possible electoral alliance with the Pakistan Musilm League-Quaid or any other party, saying the PTI would contest elections on each and every constituency of Pakistan.

The PTI chief strongly reacted to the Monday’s statement of former premier Nawaz Sharif before the accountability court in Avenfield reference.

“Absolutely shameful! A thrice-elected PM today declared before the NAB court that the Avenfield apartments belonged to his sons and he did not know where they got the money from.

“But as they are UK citizens the law of Pakistan does not apply to them according to Nawaz Sharif! Qatari letter also disowned.

“After wasting two years in Supreme Court and the Joint Investigation Team as well as taxpayers money, Nawaz Sharif now finds an absurd way to justify his money laundering.

PML-N and PPP reach consensus over next caretaker PM nominees

“This means anyone, like (Ishaq) Dar, can park his kids abroad along with his looted wealth and simply say he does not know where his kids money came from!” Khan tweeted.

Chaudhry, the PTI spokesperson, said Sharif was given a 128-point questionnaire and he vaguely answered 53 questions. “Nawaz Sharif kept the tradition of speaking blatant lies. His answers before the court are nothing but a chain of lies and deceit,” he said.

He said Sharif family had miserably failed to prove the sources of their massive wealth and kept on misleading the nation and relevant institutions for their financial wrongdoings.

“In the past, several military rulers and judges helped Nawaz Sharif to save his corruption but it did not happen this time around and Nawaz Sharif is angry over the new situation,” Chaudhry added.