People slam govern­ment, QESCO over failur­e to keep promis­es
By Our Correspondent
Published: May 20, 2018
Tweet Email 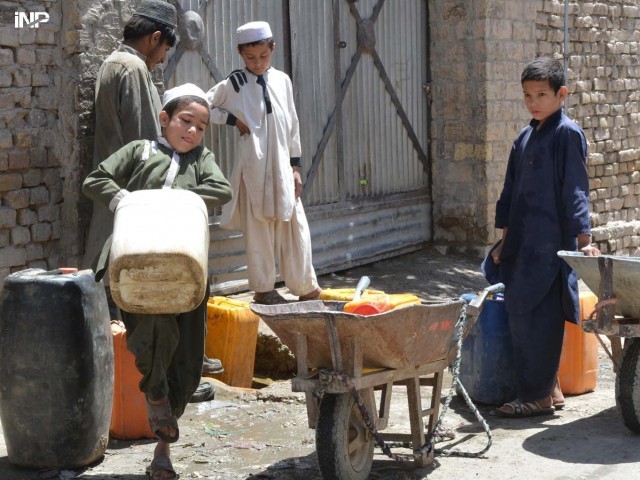 A kid uses his knee to lift a water gallon up for putting it in a cart in Quetta. PHOTO: INP

QUETTA: Despite Quetta Electric Supply Company’s (Qesco) assurance of uninterrupted power supply during Ramazan, many parts of Quetta are witnessing load shedding during Sehri and Iftar.

The government had assured the people of Balochistan that they would be provided relief from load shedding during Sehri and Iftar, but since the inception of Ramazan, people in Quetta have been complaining against Qesco and accusing the power company of deliberately plunging parts of the city into darkness during the most important timings of the day.

“Before Ramazan, load shedding was of six hours, but since Ramazan has started we have been facing unannounced load shedding, forcing us to make Sehri and Iftar in full darkness,” said Nazeer Ahmed, a resident of Qambrani Road, while slamming Qesco for making promises it cannot keep.

“We have been receiving electricity for only two hours since Ramazan began,” he said. “Our women and children are compelled to keep and break their fasts without electricity.”

Load shedding is not only causing people to keep and break fasts in darkness, but has also worsened the water crisis. People are forced to buy water tankers worth of more than Rs3,500, which is unaffordable for poor citizens.

Women, children and men are seen in various parts of Quetta carrying gallons to fetch water for their homes.

The queues outside water filter plants are increasing day by day as people are forced to stand in the scorching heat of the sun waiting for their turn to come.

“In this holy month, we are being forced to fetch water from areas far away from our home, which is causing immense hardship for us,” said Muhammad Ismael. “We are compelled to buy water for Rs4,000 to Rs5,000 per month.”

He appealed to the provincial government to provide relief to the poor people during Ramazan as they have been living in a miserable condition due to load shedding.