Farm owners claim they have incurr­ed loss of millio­ns after outbre­ak
By Mian Farooq Arif
Published: May 19, 2018
Tweet Email 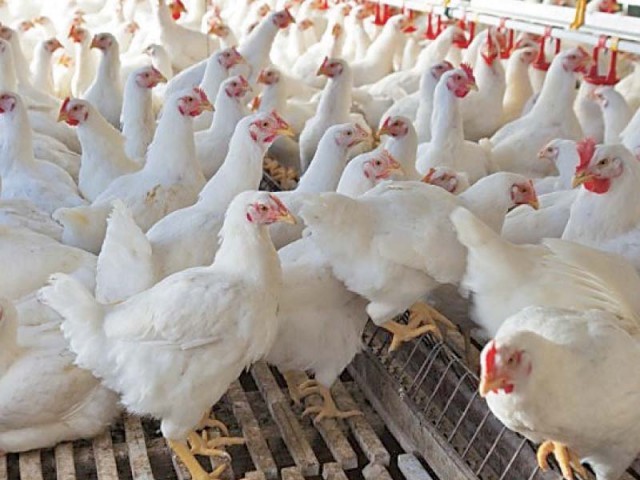 GUJRANWALA: At least thousands of chicken have died during a month after several poultry farms in different districts of Punjab have been affected by deadly viruses. The districts where the outbreak of the viruses were reported included Mandi Bahauddin, Gujranwala, Sialkot, Narowal, Hafizabad, Gujrat and others.

Officials told Express News that three viruses namely, Infectious Bronchitis (IB), Influenza H9 and Newcastle Disease have hit the poultry farms in Punjab that resulted in deaths of thousands of chickens in just one month.

They fear the current situation will lead to shortage of chicken in the local markets. When the Express News scribe visited various markets, it transpired that the chicken prices have already increased from Rs210 to Rs300 due to low supply and high demand.

While speaking to Express News, poultry farm owners said that they have stopped further chicken farming as they are getting infected in large numbers. “We have to bear loss of millions of rupees as chicken are dying due to spread of these viruses. The government has never provided us compensation or relief for the losses incurred due to outbreak of such viruses.”

They said Newcastle virus is a contagious disease that affects domestic and wild bird species. They added, “ND virus is transmissible to humans.”  They maintained that the effects of the virus are most notable in domestic poultry due to their high susceptibility and the potential for severe impacts on poultry farms.

They pointed out that symptoms of ND virus in chicken are red and watery eyes.

Similarly, they said that  IB virus is a highly infectious avian pathogen which affects the respiratory tract, gut, kidney and reproductive systems of chickens. The veterinary experts said that a chicken infected with IB virus looks normal and is bigger in size but it does not gain weight. “The weight of the chicken does not increase from one to one-and-half kilogrammes,” they elaborated.

While highlighting the symptoms of H9 virus, the doctors said, “This specific virus affects the heart of the chicken, while the chicken also suffers from influenza.”

They said, “These viruses could prove fatal if not treated at an early stage.” Meanwhile, Gujranwala Livestock Additional Director Dr Abdul Rauf told Express News that they don’t have any knowledge regarding the deaths of chickens at poultry farms.

He added that the department will investigate the matter after which the facts will be disclosed.

On the other hand, Gujranwala Poultry Association President Rana Usman said that poultry farm owners have to bear the loss of millions of rupees after spread of viruses.

He demanded of the provincial government to facilitate the farm owners and take measures to counter the threat.

Earlier, experts at the University of Agriculture Faisalabad developed a vaccine to save poultry birds from various diseases, including Newcastle virus that kills the birds and causes loss of billions of rupees to the industry.

It is the first of its kind vaccine produced through cell culture that can bear temperatures of up to 26 degrees Celsius compared to imported vaccines that cannot tolerate temperatures above 8 degrees Celsius and are supposed to be kept in a cool chain right from the port to its ultimate usage.

The new vaccine is comparatively cheaper than the imported ones and helps save billions of rupees annually in the import of vaccine and provision of cold storage facilities.

Such diseases have badly hurt the poultry sector as thousands of birds have died because of being infected with these viruses.

The mortality rate of birds has shot up to 20% and above and in some cases farmers have lost their entire stock of birds.

Farmers claim the vaccine developed by the UAF scientists is more effective in protecting the chicks from the disease.

No respite from power cuts in Ramazan