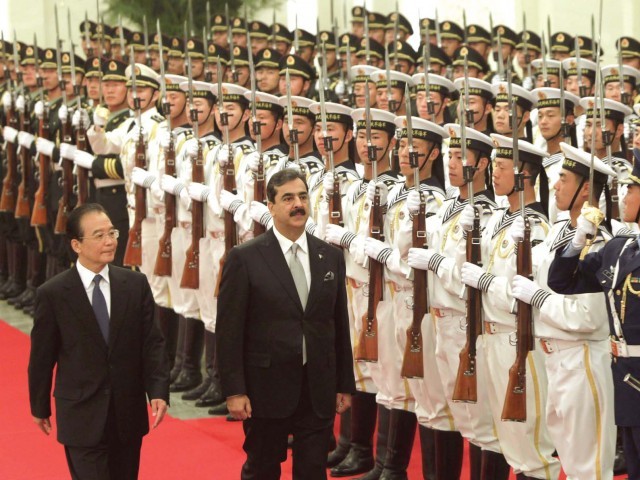 Chinese Prime Minister Wen Jiabao has endorsed Islamabad’s response to the May 2 raid by US special forces on Abbottabad that killed al Qaeda chief Osama bin Laden, as a Chinese delegation to Washington is reported to have asked the US to stop pressuring Pakistan.

“We support Pakistan’s response [to the situation],” Prime Minister Yousaf Raza Gilani quoted the Chinese premier as saying during his visit to Beijing on Wednesday. “We acknowledge that Pakistan has made great sacrifices and important contributions in the global fight against terror.”

“I wish to stress here that no matter what changes might take place in the international landscape, China and Pakistan will remain forever good neighbours, good friends, good partners and good brothers,” Wen added.

Wen also seemed to criticise the unilateral US raid on Pakistan, albeit without accusing Washington directly. “No country has any right to intervene in Pakistan,” Gilani quoted Wen as saying.

While Chinese officials have been careful not to directly confront the United States in public, they have delivered a stronger message to US officials in private.

Sources say that the Chinese government sent a senior delegation to Washington a few days before Gilani’s visit to Beijing, which urged the US to publicly acknowledge Pakistan’s role in the global war against terrorism and accept the constraints that Islamabad operates under.  The Chinese are also reported to have asked Washington to refrain from publicly humiliating Pakistan.

The Chinese delegation met with US Secretary of State Hillary Clinton as well as US Treasury Secretary Timothy Geithner. Chinese pressure on Washington is made more meaningful by the fact that the Chinese central bank holds over $2.3 trillion in US government debt.

Sources say US officials assured the Chinese delegation that the US would treat Pakistan with respect but also asked China to reiterate US concerns on terrorism to Pakistani officials during Gilani’s visit to Beijing.

The subject of relations between India and Pakistan also came up during the discussions between the two prime ministers.

Wen praised Gilani’s decision to engage in ‘cricket diplomacy’ by watching the semi-final of the 2011 ICC Cricket World Cup, played between India and Pakistan, in Mohali.

While most analysts agree that Beijing views New Delhi as a rival, the Chinese government has been keen not to unnecessarily provoke hostility with India.

Gilani met Wen on the second day of a visit to China that follows the May 2 killing of the al Qaeda leader by US Special Forces in Abbottabad – a raid that has rattled US-Pakistan ties and prompted Islamabad to court ally Beijing.

“We told them (China) that our sovereignty had to be accepted by everybody. We will not let anybody come into our territory without announcing who they are,” he said.

China has consistently defended its ally since the raid, and Wen continued to do so Wednesday. “Pakistan has made great sacrifices and important contributions in the global fight against terror,” he said.

Gilani, meanwhile, also hailed the strong relationship with China, describing it as an “all-weather friendship” earlier in the day.

“Pakistan and China are close friends and good neighbours. Our all-weather friendship is deeply rooted in the hearts and minds of our two peoples,” he said in a speech at a cultural forum in the eastern city of Suzhou.

Similar comments a day earlier by Gilani fuelled calls from US lawmakers to slash aid to Islamabad, after US Senator John Kerry tried to set relations back on the right foot on a visit to Pakistan earlier this week.

During their talks, Wen and Gilani discussed Islamabad’s desire to increase production of the JF-17 – a fighter jet developed by China and Pakistan – and its plans to buy China’s J-10 combat aircraft, Mukhtar said.

The two sides also inked three agreements on banking, economic and technical cooperation and extension of gold and copper extraction from the Saindak mines.

Gilani and Wen witnessed the signing of agreements after holding talks at the Great Hall of the People.

The agreements include a Memorandum of Understanding (MoU) between China Banking Regulatory Authority and State Bank of Pakistan, and two agreements; one on economic and technical cooperation and the other on extending the Saindak Gold and Copper Mining Project up to year 2017.

Grossman arrives for talks in Islamabad