Compil­ation of articl­es on the late human rights lawyer launch­ed
By Our Correspondent
Published: May 13, 2018
Tweet Email 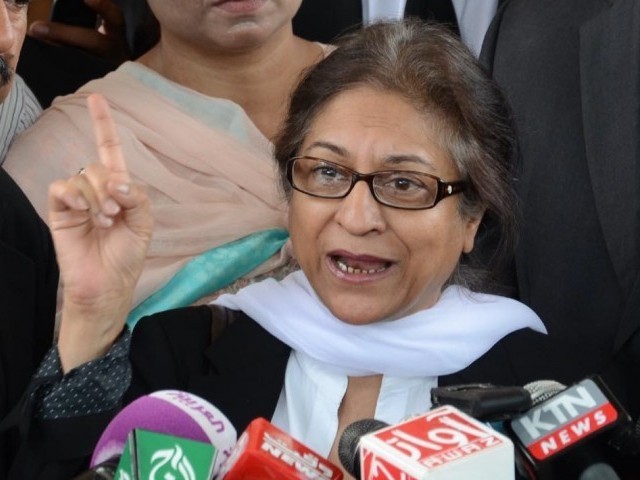 KARACHI: Civil society and human rights activists urged the need to carry forward the legacy of the late rights lawyer Asma Jahangir. Discussing a book titled ‘Our Asma Jahanghir’ at its launch on Saturday, they termed Asma a champion of human rights who always fought for democratic dispensation, humanity and voiceless people.

The book, by writer and activist Zulfiqar Halepoto, is a compilation of national and international articles written on Asma after her death.

Moderating the session at T2F, Justice (retd) Majida Rizvi said Asma was a woman of international stature who dedicated her life for a cause. “Like her persona, her funeral was also extraordinary where a large number women participating in it set a new precedent in Pakistan’s history,” she said. The activists not only discussed the book at length, but shared their memories and personal relationships with Asma. “She even once took up a poor Japanese girl’s case free of charge and bore all expenses from her pocket,” said Justice (retd) Rizvi.

Uzma Noorani, a human rights activist who worked with Asma, called her death ‘bad news that shattered most of the participants of the Karachi Literature Festival’. “Most activists and writers were in attendance at the KLF where Asma’s death dominated the entire festival activities,” she said, adding that not only in Pakistan, but the United Nations secretary general and international human rights organisations also paid rich tribute to her.

“My last interaction with Asma was on the Faizabad sit-in issue. She was worried about it and considered the event an attempt to derail democracy,” said Noorani, adding that Asma was not against any specific person or institution, but stood by the basic principles of justice. “Asma was my friend, mentor and she has left a huge vacuum that we all have to fill by pursuing her agenda,” she remarked.

Comrade Munir Memon, a left wing political activist, referred to the rape case of a blind girl in General Zia’s regime in Punjab and said, “It was a 1983 case, when police and district administration asked the blind girl to present four witnesses to prove her case. When the girl failed, the police lodged a case against the girl under Hudood Laws.” He said Asma roared ‘like a lion’ against the victimisation and took on the girl’s case.

He added that there was no media except state owned TV at the time and Asma was not hungry for media publicity.

Halepoto spoke about the objective of the book and said it was an attempt of advocacy in order to disseminate Asma’s message. “These articles were written in different languages by renowned writers and intellectuals. Humanity revolved around Asma and she worked beyond the politics of ethnicity,” he said.