Apple is almost a $1 trillion company, but watch out for Amazon

This picture taken on April 23, 2018 shows villager carrying food for his livestock past devastated houses in the old village of Luobozhai (Radish Village), which was damaged during the 2008 Sichuan earthquake, in Wenchuan county, Sichuan province. The village, on a small plateau near the top of a mountain, was badly damaged in the earthquake and most of the villagers moved to a new village nearby PHOTO: AFP
BEIJING: China marked the 10th anniversary Saturday of a massive earthquake that killed tens of thousands in southwest Sichuan province and left scars on the nation that have yet to fully heal.

The disaster provoked widespread grief in China, but also outrage after it emerged 7,000 schools were badly damaged, triggering accusations of shoddy construction, corner-cutting and possible corruption, especially as many other buildings nearby held firm.

A decade on, the government has still never released an official investigation into the accusations.

Even now campaigners and parents are seeking answers on how the quake destroyed so many schools when it struck during afternoon classes.

They became known as 'tofu schools' in China, likening their structural instability to the soft bean curd dish.

A remembrance ceremony was due to take place Saturday afternoon at a collapsed school in Yingxiu, which has been preserved as a memorial to the dead with a sculpture of a giant clock showing the earthquake's time and date. 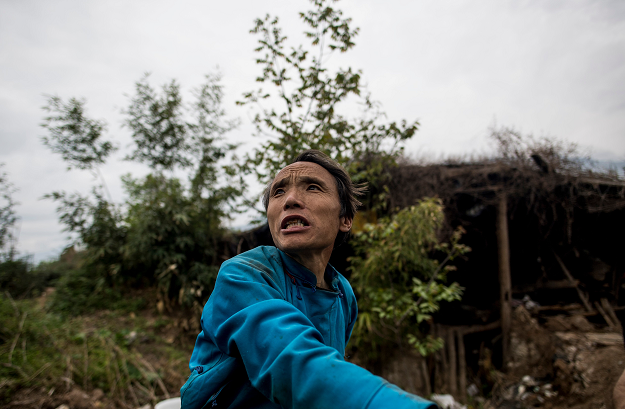 This picture taken on April 21, 2018 shows villager Wang Guocheng posing in the remains of his home in the old village of Luobozhai (Radish Village), which was damaged during the 2008 Sichuan earthquake, in Wenchuan county, Sichuan province. The village, on a small plateau near the top of a mountain, was badly damaged in the earthquake and most of the villagers moved to a new village nearby.PHOTO: AFP

The earthquake may have been one of the most pivotal events in China's recent history.

It inspired a generation of journalists and activists, catapulting artist Ai Weiwei who organised a probe into the school collapses to fame.

Huge donations to relief funds at the time popularised the idea of private giving, inspiring the creation of a host of new charitable organisations.

And as the country united in the face of the tragedy, it -- along with the 2008 Summer Olympics helped to crystallise a new sense of national identity.

But authorities quickly moved to tamp down the new spirit of openness, arresting critics and journalists alike.

Ai Weiwei was beaten by police and held in detention for months. He has since left the country.

And a plethora of scandals tainted the new enthusiasm for giving, with the Red Cross in particular caught up in a huge row over misdirected funds.

Today, the cities and villages that were destroyed have mostly been reconstructed, after the government poured billions into the recovery effort.

The standard of living has improved substantially for many survivors, who have benefited from tourists flooding into the region to see the ruins.

Even so, for grieving families, the scars run deep.

But for China's ruling Communist party, the disaster has become a propaganda opportunity.

Editorials on the quake filled state media Saturday, with commentators opining on how the region's rehabilitation displayed the strength of China and the party.

The recovery effort "shows the indomitable leadership of China's Communist Party and the superiority of the system of socialism with Chinese characteristics", wrote the official Xinhua news service.

The story went on to explain how Chinese president Xi Jinping's leadership had helped the province rebuild itself after the disaster  despite the fact he took office more than four years after it occurred.
Earlier this year, when Xi visited the ruins of Yichuan, he called for them to be used as an "important patriotic education base".

2005 earthquake: CJP sets off for Balakot to inspect rehabilitation work