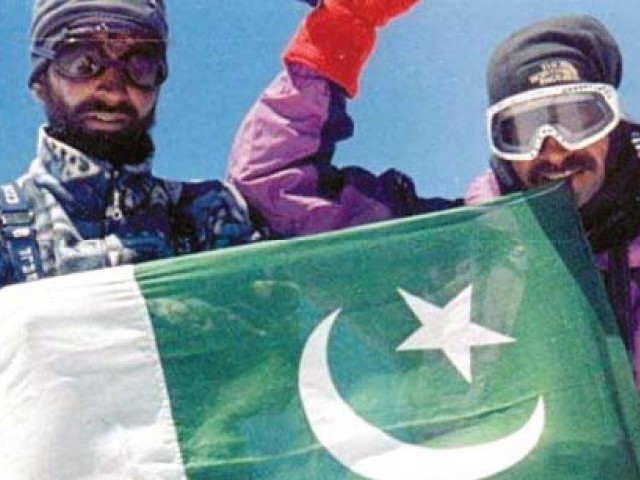 Hassan Sadpara’s incredible effort became possible because of his dream of hoisting the national flag atop Mount Everest. PHOTO: EXPRESS

At a relatively advanced age, he defied various hardships of mountain-climbing: the rough terrain, adversities of the harsh climate and a deteriorating oxygen supply, to conquer Mount Everest. Hassan Sadpara overcame all these obstacles on his life-endangering mission, claiming that it was only love of the country that saw him make it to the top.

The Skardu climber, who is in his 40s, reached the summit of the world’s tallest mountain on May 12 becoming the second Pakistani after the legendary mountaineer Nazir Sabir to hoist the national flag on the 29,028ft peak.

After accomplishing this feat, Sadpara also became the most successful climber in Pakistani history, as he also enjoys the distinction of reaching the peaks of all five mountains of over 8000m in Pakistan. Sabir only managed to reach summits of four of these mountains.

Sadpara, who runs a small shop in a flea market in Skardu, said it was sheer patriotism that helped him achieve his goal. He claimed that the one thought that kept his ambition alive during the deadly mission, was that of hoisting the Pakistani flag atop the Everest.

“I did this purely for my country,” Sadpara told The Express Tribune in an interview from Kathmandu. “Only huge inspiration can result in big achievements and my inspiration is Pakistan.

“It was death at every step when I was nearing the summit. But when heavy rain and dangerous slides were making me weak, dreams of hoisting the Pakistani flag at the Everest peak gave me strength.”

Sadpara dispelled the notion that he reached the summit without oxygen supply.

“I spent the best part of my mission without oxygen supply but its use became inevitable due to the worsening weather as I neared the peak. I have evidence of my success. I’ve proved it to Nepalese officials and will also prove it to Pakistanis when I return.”

Lamenting the present state of the tourism industry in the country, Sadpara hoped his achievement will help in reviving tourism.

“Skardu was a central tourist spot but unfortunately security concerns have now altered the situation. I hope my achievement will send a positive message to the outside world and with that we revive our tourism industry.

“I have a small shop at the flea market and it becomes very hard to make ends meet. I also request Pakistani sports authorities for financial assistance.”

Inspired by his father and uncle, Sadpara started mountain-climbing in 1999 and the same year conquered Nanga Parbat. He climbed K2 in 2004 and two years later reached the peaks of Gasherbrum 1 and Gasherbrum 2 within a week of each other in July 2006. In 2007, he made it to the Broad Peak to become the first Pakistani to scale the tallest five mountains of the country.

Greig calls for end to India ‘domination’ of ICC