Rs100.48b allocated for maintaining the peace of the province

Rs100.48b allocated for maintaining the peace of the province 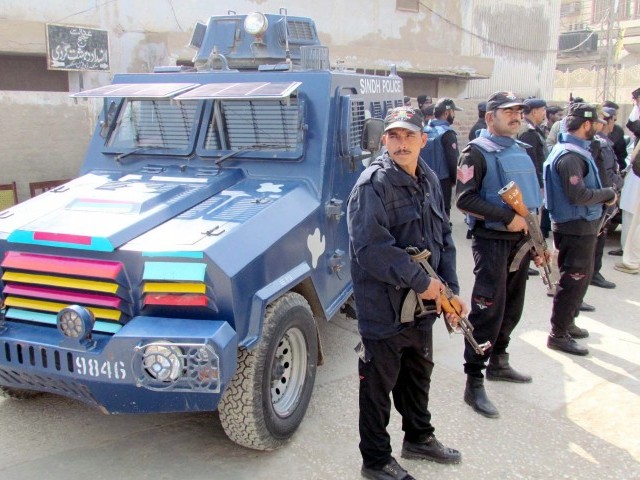 KARACHI: The Sindh government has allocated Rs100.48 billion for the home department for the financial year 2018-19 as compared to last year’s budget estimate of Rs90.5 billion. The allocation includes the Rs89.4 billion budget for the Sindh police, which is an increase of 11% over the outgoing fiscal year.

To strengthen the law enforcement agencies 6,061 new vacancies have been created with a financial impact of Rs3.3 billion. In order to combat terrorism and maintain law and order, Rs2.4 billion has been allocated for the procurement of the latest equipment and high-tech armoured vehicles.

In a step towards curbing the sale and use of illegal weapons, Rs100 million has been allocated for the computerisation of the arms licence system. The compensation amount for law enforcers who are killed in the line of duty has also been enhanced from Rs5 million to Rs10 million.

“There is no doubt that street crime has not been controlled as effectively as it should have been. However, I am hopeful that with the dedicated efforts of our law enforcement agencies this menace will be eliminated with the passage of time,” Chief Minister Murad Ali Shah told the assembly during his budget speech on Thursday. “The police department has been moving towards specialisation and professionalism. In this regard, more specialised units have been set up, such as the Counter-Terrorism Department, Special Security Unit, Rapid Response Force, Anti-Riot Unit, Anti-Car Lifting Cell and IT cadre.”

Shah said that the human resource capacity of the police is also being enhanced through meritocratic recruitment through the National Testing Service (NTS), training by the Pakistan Army, better incentive packages and introduction of welfare schemes as well as benefits under the Shaheed Compensation and Recognition Act, 2014.

“As a token of our gratitude, Rs1 billion was allocated for disbursement as compensation to the families of [martyrs] and injured personnel of our security forces,” he explained. The recruitment of 10,000 police personnel was done through the NTS and Rs159 million has been allocated for training the newly-recruited police constables at Pakistan Army Training Centres.

The investigation capability of the police is being enhanced by establishing a state-of-the-art forensic laboratory as well as a DNA laboratory and crime record database. Appreciating the department’s achievements, the CM said for the first time in the history of the Sindh police, all driving licence branches throughout the province have been centrally connected and driving licences are being delivered to applicants at their doorsteps through a courier service.

Public-police interface is being strengthened by establishing facilitation centres at each divisional headquarter to provide people-friendly one-window police services to citizens, including the registration of FIRs and lodging of miscellaneous complaints.

Shah said that a large number of schemes have been proposed by the government. These include revamping the Counter-Terrorism Department and creating a professional and dedicated force styled as the Counter Terrorism Force (CTF).

The government also proposed enhancing compensation for martyrs and injured law enforcers to make the compensation at par with other provinces while allocating a Rs2 billion compensation package. The CM proposed creating 2,782 posts for the security of China-Pakistan Economic Corridor-related projects and 2,959 posts for training, crime branch, traffic and technical training for the enhancement of the capacity of these units. Shah also said that 11,259 posts of different ranks be created in the Sindh police. He said the government will be allocating funds of Rs5.71 billion in the new SNE 2018-19 for the purchase of physical assets, Rs.5.35 billion for the Sindh police, Rs306.86 million for the Rangers, Rs14.87 million for the Frontier Constabulary and Rs42.996 million for the home department and its attached offices.

There are certain measures which are out of the mandate and purview of provincial governments. “We have therefore taken up them with the federal government for further improvement in overall crime control,” he said. These measures include setting up an integrated national database comprising computerised national identity cards, driving licences, vehicle number plates, arms licences and mobile SIM cards. Another measure is establishing a unified criminal record database at a national level with access available to all law enforcement agencies. The Sindh police is also going to develop a mechanism for effective monitoring of social media, including Facebook, Whatsapp and Twitter.