It will help assess how to regula­te drones and integr­ate them safely into US air space
By Reuters
Published: May 10, 2018
Tweet Email 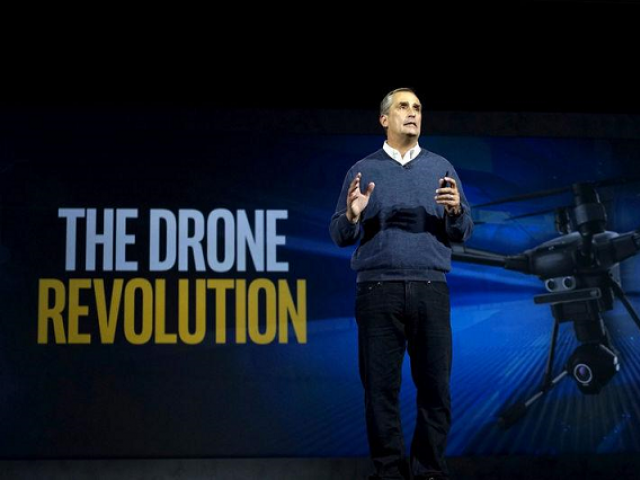 Intel CEO Brian Krzanich talks about the new Yuneec Typhoon H drone, which he said was the first consumer drone equipped with Intel's RealSense sense and avoid technology, during his keynote address at the Consumer Electronics Show in Las Vegas, US, January 5, 2016. PHOTO: REUTERS

WASHINGTON/SAN FRANCISCO: Apple soon will be capturing images of North Carolina by drone; a 1,500-pound, unmanned aircraft will look for mosquitoes in Florida; and startup Flirtey will fly medical equipment on drones to heart-attack victims in Nevada.

The projects are among 10 announced by the US Transportation Department on Wednesday that will help it assess how to regulate drones and integrate them safely into US air space. The United States has lagged other countries in experimentation with drones, something the program hopes to correct.

Missing from the projects are Amazon.com, the world’s largest online retailer, and China’s DJI, the world’s largest maker of non-military drones. About a dozen applications that included DJI were rejected. An application that would have seen Amazon deliver goods by drone to shoppers in New York City was also declined, a person familiar with the matter said.

The contest drew 149 bids from locales looking to host flights at night, flights over people and other drone operations that US rules prohibit. The applicants listed companies they would partner with in the experiments, and the winners may have a head start at the billions of dollars and tens of thousands of jobs the young industry expects to create.

The wide interest in the US initiative, launched by President Donald Trump last year, underscores the desire of a broad range of companies to have a say in how the fledgling industry is regulated and ultimately win authority to operate drones for purposes ranging from package delivery to crop inspection.

One clear winner was Nevada-based Flirtey, a drone delivery startup. It said it was a partner on four of the winning applications and expects the US Federal Aviation Administration programs to jump-start growth.

“This gives it the ability to move into any geography in the United States and move out of test mode into full operation,” said Mark Siegel, a partner at Menlo Ventures, an investor in Flirtey.

The startup will have to hire more people, ramp up its testing and add more features to its drones — all of which will require more money, and Flirtey will complete another financing round this year, Siegel said.

AirMap, an airspace management company for drones, said it was on six winning applications.

Winner Virginia Tech said that Alphabet’s Project Wing, AT&T, Intel, Airbus and Dominion Energy are among the partners for its pilot program that will explore emergency management, package delivery and infrastructure inspection.

Despite being sidelined for now, Amazon and China’s SZ DJI Technology both offered support for the program. DJI’s widely used products may play a role in some projects, even if the company does not formally take part.

Amazon, which has worked with the FAA on policy as it has tested drone technology around the world, said the fate of its applications was unfortunate, but it was focused on developing safe operations for drones.

Uber is working on air-taxi technology and will deliver food by drone in San Diego, California.

FedEx will use drones to inspect aircraft at its hub in Tennessee, as well as for aircraft parts shipments and some package deliveries between the airport and other Memphis locations, Memphis Airport Authority Chief Executive Scott Brockman told Reuters. General Electric is also a partner, he said.

The FAA has said regulations are necessary to protect the public and the National Airspace System from bad actors or errant hobbyists. Several incidents around major airports have involved drones getting close to aircraft.

Earlier, the agency confirmed it had sent two planned rules to the White House to regulate the increased use of unmanned aerial vehicles.

One would allow drones to fly over people while another proposal submitted would allow for remote identification and tracking of unmanned aircraft in flight. After both are formally proposed, it could take months before they are finalized.

Here’s what Google launched at the annual developer conference