A develo­pment budget of Rs663 billio­n has been approv­ed for next  fiscal year.
By Shahbaz Rana
Published: May 29, 2010
Tweet Email 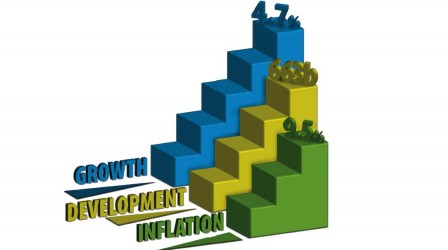 Next fiscal year’s economic growth target has been set at 4.5 per cent while inflation is estimated at 9.5 per cent, informed Adviser to Prime Minister on Finance Hafeez Sheikh at a press conference on Friday.

The overall development budget was approved in a meeting of the National Economic Council (NEC) headed by Prime Minister Syed Yousaf Raza Gilani and attended by all the provincial chief ministers.

Manufacturing sector to  lead the way

The manufacturing sector is projected to lead next year’s growth as the NEC has estimated 5.6 per cent growth in this sector. The services sector is expected to grow by 4.7 per cent and the agriculture sector by 3.8 per cent.

“It was decided that the fiscal policy will be aligned with the monetary policy to check inflation,” said the adviser.

Hafeez Sheikh said that out of total Rs663 billion more than half of it, Rs373 billion, will be spent by the provinces. The provinces’ current fiscal year budget was Rs294 billion but they only got Rs245 billion, he added.

The Public Sector Development Programme (PSDP) would get Rs280 billion while the Earthquake Reconstruction and Rehabilitation Authority (ERRA) would be given Rs10 billion during fiscal year 2011 out of the development budget, he added.

Over one-tenth of the total development budget will be financed by borrowing money from financial institutions, said Sheikh .

“Unlike this financial year, next year’s development budget is not unrealistic and all the money will be released on a quarterly basis that too automatically and without having to chase after the finance ministry,” said Sheikh.

For the current financial year the government had announced Rs646 billion for development but the actual expenditure would be Rs490 billion, showing a cut of almost one-fourth of the total allocations.

The government is facing severe financial crunch, which has compelled the policymakers to restrict the Public Sector Development Programme and keep it at a reasonable level. The federal ministries have demanded Rs735 billion to meet the development requirements for the next financial year but the priorities committee recommended Rs328 billion for the federal ministries and the final number is Rs280 billion.

“Next year’s development budget is increased but it is still less than what we need for development,” said Deputy Chairman Planning Commission, Dr Nadeem ul Haq.

Hafeez Sheikh said that the federal government allocated Rs446 billion for the current PSDP but due to scarcity of resources only Rs235 billion could be spent, showing a massive cut of almost half of the total allocation.

For the coming financial year Rs280 billion have been allocated for PSDP, which is Rs166 billion less than this year’s development budget but still more than the actual amount spent this year.

The government has allocated Rs136 billion for infrastructure sector, Rs134 billion for social sector and Rs10 billion for the production sector out of Rs280 billion PSDP budget.

Deputy Chairman Planning Commission, Dr Nadeem ul Haq who was also present at the occasion, said that Rs35.4 billion were allocated for the water sector and for the energy sector Rs29 billion, Rs 17 billion for transport and Rs5.9 billion were earmarked for the agriculture sector.

Similarly, the Higher Education Commission (HEC) is expected to get Rs2.7 billion less than the current financial year as its budget has been fixed at Rs15.8 billion.

The healthcare sector would get Rs18.2 billion, which is again less than the current fiscal year’s development budget.

The deputy chairman said that next year the resources would be given to only those projects which will be near completion.

There will be no problem in meeting the defence needs as the mechanism for the disbursement of Coalition Support Fund has been agreed with the US, said Secretary Finance, Salman Siddique.