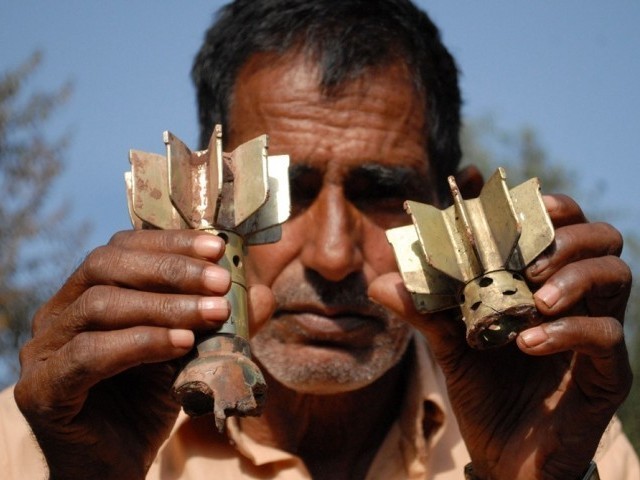 A man displaysmortar shrapnel allegedly fired across the Line of Control (LoC) between Pakistan and India, in the Kotli sector of Azad Kashmir on October 8, 2014. PHOTO: AFP

MUZAFFARABAD: The AJK cabinet approved on Friday a number of measures to protect civilian population residing along the Line of Control (LoC) from persistent Indian firing and shelling.

The special cabinet committee of the AJK government submitted a report recommending the measures.

It was decided that government will provide Rs1million as compensation to the families of martyred, Rs0.8million to each disabled person and Rs 0.3 million to those critically injured.

The affected families will also be provided financial help for rebuilding of their damaged houses, destroyed businesses and moveable and immoveable properties.

It was also decided to provide required budget to the district administration for swift and immediate help to the victims of Indian shelling. The medical board will also be constituted at the district and tehsil headquarter hospitals to asses and recommend expenses for the medical treatment of those injured.

“First aid medical posts will be set up close to LoC where doctors and paramedics would be available round the clock, while mobile ambulance would also be available in the areas located 15 to 20 kilometres from LoC,” the report stated.

“A fleet of ambulances from other districts will be dispatched to firing affected areas with required budget till new ambulances are purchased,” the Cabinet decided.

It was further decided that availability of surgeons, gynecologist, anesthetists and specialists will be made sure to meet any eventuality, while vacant posts of doctors and allied staff will be filled up on urgent basis in the tehsil hospitals, basic health units in all the districts contiguous to the LoC.

The doctors serving along the LoC would be offered special salary package. It was also decided that all areas vulnerable to cross border shelling will be exempted from loadshedding, and round the clock electricity will be ensured.

The committee also recommended that commissioners and deputy inspector generals (DIGs) of police will visit once in a month the areas affected by Indian shelling, while deputy commissioners, superintendents police (SPs) and district health officers would visit the areas twice in a month.

The cabinet also decided to constitute another committee to be headed by additional chief secretary (development) to include the projects relating to LoC in the Annual Development Programme (ADP) for 2018-19 and to take necessary steps for amendments in the relevant laws for provision of unhindered relief to the population.

Earlier, the Cabinet committee in its report proposed providing doctors, paramedics and medicines to the existing basic health units located near the LoC, provision of timber on subsidised rates to rebuild the houses damaged by Indian shelling, extending mobile phone services, extending 1122 service in the affected areas, waving of arms license fee and setting up village defence committees.

The special committee headed by minister for works and communication, Chaudhry Muhammad Aziz and comprising minister for revenue, Sardar Farooq Sikandar and senior member revenue board, Fayyaz Ali Abbasi, had prepared the report.

Speaking on the occasion, Prime Minister Raja Farooq Haider Khan said the civilian population residing along the LoC was the first line of defence for Pakistan. He said the brave people residing along LoC were defending the motherland shoulder to shoulder along with the armed forces.

“Forcing civilian population to dislodge is military strategy of India and this was the very reason Indian army is targeting unarmed civilians,” Khan said and added that such nefarious designs will never be allowed to materialise.