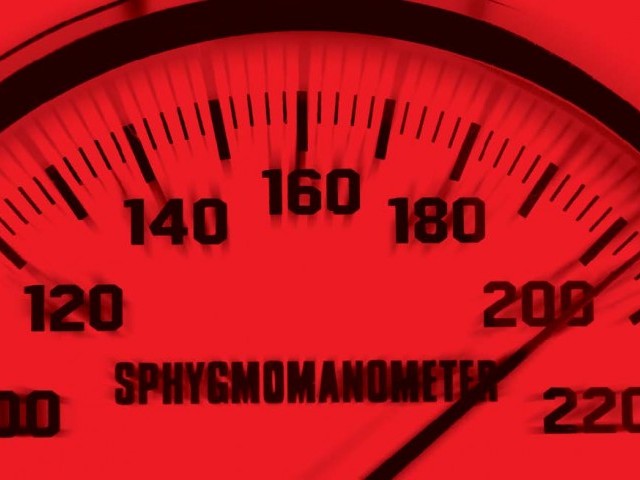 Rafiq Ahmed, 58, who got paralysed after having a stroke one year ago has been suffering from hypertension for long. He did not pay much attention to its treatment and is now completely bed ridden.

“By profession he was a businessman and was too active but he never kept a check on his eating habits which led him to this condition,” said Anees Ahmed, his eldest son while talking to The Express Tribune.

The son narrated that his father once suffered a stroke while he was on the road and fell at the spot. But even this did not make him get his blood pressure checked regularly or stop eating unhealthy food. “My father was a food lover, he used to have very oily dishes like siri paey, nihari, brain masala among others but now he is only surviving on semi-liquid diet,” said Anees.

Dr Akhtar Ali Bandeshah, assistant professor at Cardiology Department of Pakistan Institute of Medical Sciences (Pims), said though there is no permanent cure of hypertension, which is commonly known as ‘silent killer’, but it could be best controlled by checking blood pressure regularly, controlling diet and mostly by doing exercise everyday.

He said currently there are an estimated 50 million hypertension patients in Pakistan. Nowadays youngsters are also suffering from it because of excessive use of shisha, smoking, consuming junk food and unfortunately not considering exercise as the best option to keep them fit.

“There are many parents who have associated junk food with ‘treat’ and their children love having it as they consider it something special,” said Dr Bandeshah.

He said lifestyles play an important role in a person’s health. Excessive smoking, diabetes, obesity, excessive use of salt, stress and family history are the main risk factors behind hypertension.

“Parents should tell there children about the importance of fresh fruits and vegetables in their diet rather then taking them to junk food outlets,” he added.

He said acute hypertension could cause heart attack, nervous breakdown which sometimes lead to death.

Another health expert, Dr Sania Nishtar, while sharing her views on the subject said it is difficult to say that hypertension is increasing in the country as no exact statistics are available on it.

Talking to The Express Tribune, Dr Abbass Malik, registrar medicine at District Headquarters Hospital (DHQ), Rawalpindi said majority of the patients are diagnosed with hypertension during a regular medical checkup and are unaware of when it started.

It does not have any different symptoms therefore people fail to understand that they are hypertensive patients.

Dr Malik said stress is one of the major causes behind hypertension because of the increase in terrorism in the country, inflation, unemployment among others.