Author­ity estima­tes the damage caused is worth Rs2.4 millio­n
By Imran Adnan
Published: May 3, 2018
Tweet Email 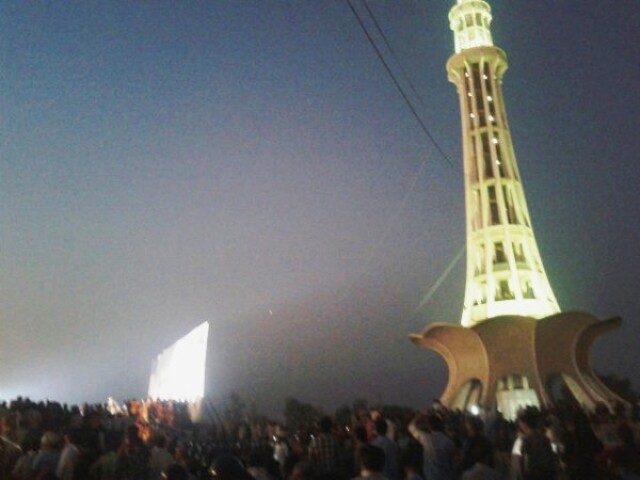 LAHORE: Pakistan Tehreek-e-Insaf’s (PTI) ‘tsunami plus’ public gathering at Minar-e-Pakistan last Sunday has caused around Rs2.4 million worth of losses to the historic Greater Iqbal Park.

Parks and Horticulture Authority (PHA) Director General Mian Shakeel Ahmed told The Express Tribune that the authority has estimated that the political party’s public gathering at Minar-e-Pakistan damaged engineering and infrastructure, including lights, railings and other fixtures, worth Rs2.14 million. This is besides horticulture losses of Rs238,200.

The authority, he said, decided to recover the same from the PTI leadership. “It has prepared a claim which is being forwarded to the political party. It is public infrastructure, developed through taxpayers’ money, so no political party or citizen can be allowed to ruin it,” he maintained.

PTI Central Vice President and Member Punjab Assembly (MPA) Shoaib Siddiqui said his party has not yet received any claim from the PHA or any other government agency. “The party will look into it once it receives the claim,” he added.

Siddiqui said the party is ready to sit with the management of the Greater Iqbal Park. “We have video footage of the site when we started making arrangements.

There was some littering issue in the park after the public gathering. Being responsible citizens and a political party, I, along with others workers, visited the Greater Iqbal Park for a cleanliness drive,” he highlighted.

He said the party is ready to plant as many plants as the authority desires as the park is part of national heritage.

Following PTI’s public gathering on April 29, the party has to face great criticism when pictures of a mess, allegedly created by its workers, started doing the rounds on social media and news channels around the country.

To avoid any further embarrassment, the PTI leadership visited the park on Tuesday to clean the garbage and posted pictures and videos on social media websites.