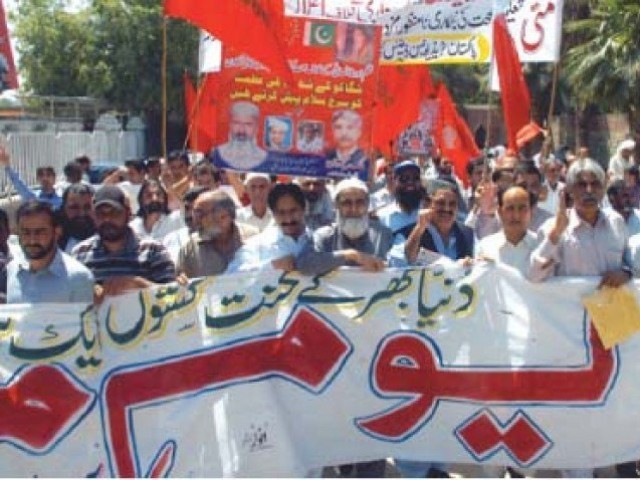 PESHAWAR: As the nation marked World Labour Day, the provincial government has finally prepared a draft policy for labourers in the province.

Prepared by the Khyber-Pakhtunkhwa (K-P) Labour Department, the K-P Labour Policy 2018, hopes to ensure decent working condition for all workers, irrespective of nature of work, in compliance with basic international labour standards (ILS) on working conditions, hours, health and safety, holidays and wages.

Finalised after discussing with all concerned stakeholders, the department has submitted the draft policy to the government for approval.

The 26-page policy, available with The Express Tribune, states that the provincial government, in collaboration with the International Labour Organisation (ILO), international partners, the federal government and organisations of employers and workers, would gradually discourage non-standard employment and eradicate child labour and forced labour.

The policy also seeks to address all types of discriminations in wages and employment due to gender, creed, ethnicity, origin and religion.

May Day marked across the world

It further notes that special efforts would be undertaken to make law effective in the formal sector apart from extending its reach to the informal sectors, contract workers, mine workers, home-based workers, agricultural sector and other categories of vulnerable workers.

Moreover, the policy has the objective of promoting youth employment facilitating them through technical education, focusing on labour export, career counseling and job placement and development of a labour market information and analysis system.

Under the policy, the government will establish a modern training institute which will train people, to inspect staff and social partners on labour laws, labour administration, industrial relations and social dialogue.

The policy will also prioritise the health and safety of workers at the workplace. It is designed to protect workers in general and mine workers in particular. It provides for an institutional arrangement, preventive measures and rescue management to promote a hazard-free work environment in the province.

The policy suggests capacity building and training of the presiding officers of labour courts, authorities under the K-P Payment of Wages Act and Workmen Compensation Commissioners.

The policy will ensure that they are trained on labour laws, rights and obligations of workers and employers meaning thereby that they could be able to understand the nature of the disputes/ issues while deciding the cases.

The policy will also ensure that women workers are facilitated at the workplace and beyond to ensure their maximum participation in the labour force.

The minimum wage board will be strengthened under the policy by linking it with research institutions and universities with the purpose of promoting research on factors affecting workers’ micro-economy. The findings of such studies will be considered by the board during wage fixation.

The quota for specially-abled people will be protected under the policy as enshrined under the Employment & Rehabilitation Ordinance, 1981. Moreover, the policy will help facilitate their employment. Other provisions of the act will also be ensured in all the industrial and commercial establishments of the province.

Like the specially-abled, the policy will also seek to integrate members of the transgender community into the workforce through programmes for promotion of transgender in skill development and job placement in industrial and commercial establishments.

Speaking to The Express Tribune, K-P Labour Department Chief Inspector Factories Wajid Khan said that this was the first time that the provincial government had developed a draft for the relief and rights of labourers in the province.

He confirmed that they had completed the draft after consulting with stakeholders last week and that the policy will be submitted for the approval of the provincial cabinet.

To a question, the chief inspector said that even if the current government could not approve and pass it before its tenure ends later in May, it could also be presented to the next government.

Wajid termed the policy a great step for the betterment of labourers in the province.