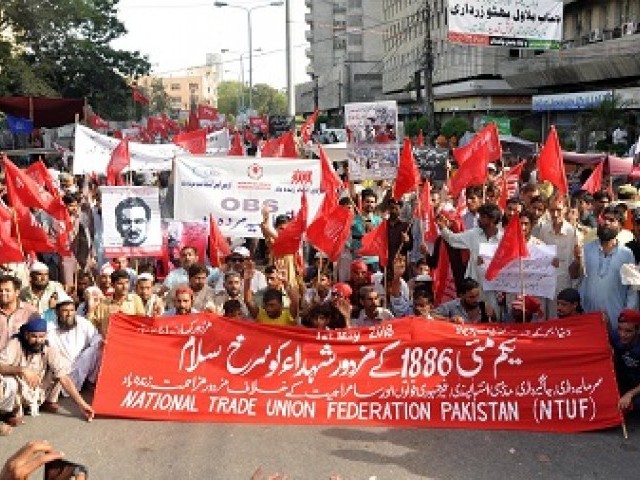 KARACHI: May Day is the flag of revolt against the atrocities of capitalism and will continue to wave until the omniousness of the ‘blood-sucking’ system is over in the world.

These views were expressed by speakers while addressing the May Day rally from Regal Chowk to the Karachi Press Club organised by the National Trade Union Federation (NTUF) on Tuesday.

The rally was led by NTUF President Rafiq Baloch as a large number of workers from different industries, including home-based working women, attended it. Similar rallies were also held in Gadani, Hub, Hyderabad, Sanghar, Dadu, Thatta, Tando Muhammad Khan and others.

The speakers said that capitalism has deprived billions of people in the world of their rights and in Pakistan, the situation was even appalling. They said that the country’s estimated six-and-a-half-million workforce was denied of their basic and constitutional rights to form unions and collective bargaining.

The speakers said 90 per cent of the industrial units did not implement the minimum wage and eight-hour shift laws and 95 per- cent of the total workforce was not registered with social security and pension funds because they don’t get appointment letters from their employers.

May Day marked across the world

Several factories have almost zero health and safety facilities, they said, adding that labour inspection and laws were virtually suspended due to which the factories and other workplaces had become death mills for workers.

The Ali Enterprises’ Baldia factory fire and Gadani oil tanker tragedy are stark reminders of the worsening situation. Along with the employers, the government and its relevant departments are responsible for the poor conditions faced by workers. Due to the government’s apathy, the employers have a freehand at treating workers unfairly. Among them, the agriculture workers in rural areas have been through the worst situation.

Speakers at the rally emphasised on labour laws, saying that according to the laws and Supreme Court’s orders, the contractual system was illegal, yet employers continue to use it extensively. It seems that labour laws have become a mockery of themselves.

The speakers said the Sindh Industrial Relations Act, 2013 brought the agriculture and fisheries workers in the legal definition of workers yet there has been no practical implementation on it nor have the authorities made its rules. Similarly, the home-based workers draft bill seeks to be passed through the Sindh Assembly that has nearly completed its five-year term.

Pakistan has so far ratified more than 38 conventions of the International Labor Organization, but there’s no implementation on them. The industrialists are earning billions of rupees from the GSP Plus status granted by the European countries but they keep disrespecting the labour laws that they are bound to follow in the status.

The speakers put up several demands at the rally. Among others, they demanded that minimum wage should be set at least Rs30,000, social security institutions be made accessible to all workers, minimum pension should be made equal to that of minimum wage and eight-hour working shift be ensured, the decision to privatise Pakistan Steel Mills and Pakistan International Airlines be overturned, all forms of contractual employment, including third-party contracts, be abolished, like labour courts, peasants courts be established in all districts across the country.

Meanwhile, former Senate chairperson Mian Raza Rabbani called upon on Tuesday all workers, intellectuals and progressive elements to prepare a counter narrative to get their fundamental rights.

Riot police use teargas against anarchists at Paris May Day rally

Addressing a workers convention to mark May Day, jointly organised by trade unions and labour supporting organisations at the Karachi Press Club, Rabbani said trade unions were weakened and students unions were banned in Pakistan under a well-planned strategy.

“The state does not encourage a counter narrative, so it has decided to weaken all other narratives,” he said.

Rabbani said the state wants to impose its own narratives, but has failed miserably. It has used the tools of divide and rule from the British era to divide the workers on a linguistic and sectarian basis, he said.

“There are only two forces in Pakistan – the oppressors and the oppressed,” he said, adding that the federation of Pakistan would not be stronger until all workers, intellectuals and progressive are united to counter the state’s narrative.

Rabbani recalled that the so-called ‘Decades of Reforms’ in the 1960s was a dark era when the labour movements were weakened and all fundamental rights usurped.

“History has witnessed that the oppressed nations got their rights after a prolonged struggle,” he said, adding that an organised movement is needed.

Malik Lal Khan of Trade Unions Defence Campaign said that the elite has control over the government, Parliament and trade. He said that a worker cannot reach the Parliament because the system has been designed in such a way that only the elite can reach it.

Khan said that in the 1960s, trade unions had a force and were successful through their movement, but that force has now weakened.
Sindh Health Workers Federation’s Bushra Arain said that the lady health workers have fought a struggle for the last 14 years. “We have gotten ourselves regularlised,” she said, adding that only unity can solve problems.

A set of resolutions was passed on the occasion, which demanded the government to implement Supreme Court’s decision regarding contract system. All daily wage employees should be regularlised, said the speakers.

All workers should be brought into the social security net, a resolution said, adding that laws under the International Labor Organisations’s conventions should be implemented across the board.

The participants expressed concern over the non-availability of health and safety facilities in many industries and commercial units.

The resolutions expressed serious concern over the conditions of agriculture workers in Pakistan and the government’s failure to control bonded and child labour. The workers expressed their solidarity with the peasants of Okara who have started a movement for their land rights.

One of the resolutions condemned privatisation plan of Pakistan International Airlines and Pakistan Steel Mills and demanded the government to stop privatisation of state-owned organisations.

Another resolution demanded implementation of all labour laws, including the provision of equal rights to women workers.

With additional input from our correspondent