GDA; at best it can create someth­ing like Johar Town or sector G-14
By Hasaan Khawar
Published: May 1, 2018
Tweet Email 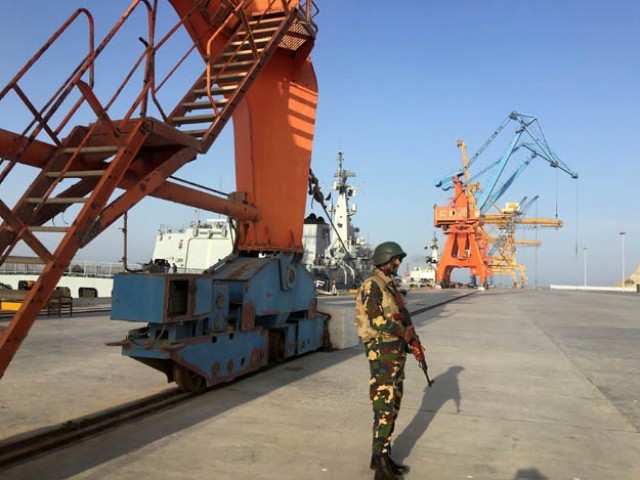 The Gwadar Port, an integral part of CPEC. PHOTO: REUTERS

Gwadar Port is one of the four key priorities of CPEC with complementary projects, including Gwadar International Airport, Eastbay Expressway and the CPEC Free Zone. China Overseas Port Holding Company is responsible for development and management of Gwadar Port, with three subsidiary companies to manage and operate port terminals, provide berthing solutions and develop the free economic zone in the northern harbour.

But the ambitions about Gwadar far exceed these projects and extend to creating an international port city that can rival Dubai, Hong Kong and Shenzhen. A new master plan for Gwadar Smart Port City is being formulated and the future of the city banks upon its implementation, with the underlying assumption that traditional government institutions like the Gwadar Development Authority (GDA) can perform this feat.

Even if the GDA matches the capability of the Lahore Development Authority or the Capital Development Authority, at best it can create something like Johar Town or sector G-14 and not Dubai. The idea is comparable to building a 100-storey steel skyscraper and hiring a domestic contractor specialised in building townhouses.

Gwadar city will be the hub for providing residential, commercial and urban services for the residents and visitors. Without a secure, vibrant and modern urban life, Gwadar can never achieve its full potential. This however is dependent on the city’s governance and that unfortunately is nowhere on the policy makers’ radar.

In World Economic Forum’s Global Competitiveness Index (GCI), Pakistan is ranked 115th out of 137 countries, performing worse than Uganda, Ghana and Ethiopia. India is at 40 and Bangladesh at 99. Not only is Pakistan the worst performing country in South Asia on five out of twelve pillars of GCI, but it also falls below South Asian average on all indicators relating to public-sector institutions, including corruption, property rights, judicial independence, undue influence, wasteful public-sector expenditure, burden of government regulation and transparency in policymaking. GCI is not the only yardstick. Transparency International ranks Pakistan at 117 out of 180 countries on Corruption Perceptions Index, whereas the World Bank puts Pakistan at 147th out of 190 countries on the Doing Business ranking.

If the traditional public-sector institutions in Pakistan have failed to reach even the South Asia’s average level of governance, how can they be expected to match Dubai or Hong Kong? No wonder, Gwadar is flooded with dubious housing schemes with promises of overnight fortunes for naïve investors while manual land records and doubtful land titles helping patwaris in selling the same land many times over.

Good governance is a far bigger priority for genuine investors than incentives or infrastructure. Gwadar needs a governance structure that can ensure secure land titles, swift dispute of settlement, effective contract enforcement, state-of-the-art urban services and a bureaucracy, which is helpful, and not a hindrance for the citizens.

The solution may lie in something known as a ‘charter city’, providing an island of good governance. Charter cities are not meant for offering unlimited incentives or concessions and are rather reform enclaves, which can create a micro-investment climate favourable to investors.

The model has been tested and tried in many countries, where a charter document and not the national laws regulate the city. Special economic regulations only form a subset of overall regulatory regime, which may otherwise include special laws, courts, police, tax regime and utility companies. Hong Kong and Shenzhen have been long quoted as prominent examples of charter cities, but within California alone, there are 100+ charter cities, including the famous Silicon Valley.

Gwadar’s future hinges on a robust governance solution that has to be agreed amicably between the federal government and the Balochistan government, which should then be followed by creating sufficient capacity on ground to walk our talk of making Gwadar an international free port city.