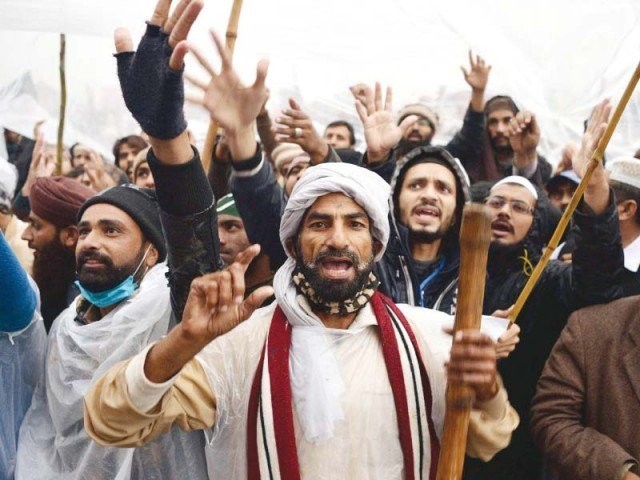 ISLAMABAD: The top intelligence agency of the country drew the ire of the Supreme Court yet again as the judges expressed annoyance at the lack of clarity on who was actually funding the Tehreek-e-Labbaik Pakistan (TLP).

A two-member special bench, comprising Justice Mushir Alam and Justice Qazi Faez Isa, is hearing a suo motu case regarding last year’s sit-in at Faizabad interchange in Islamabad. The bench noted that the protesters were promoting hate and violence.

“Those who claim to love Prophet Muhammad (peace be upon him) were using filthy language. Is this Islam? They even abused judges including the Chief Justice of Pakistan,” said Justice Isa.

Interestingly, the supplementary cause list was issued at 10:00am on Wednesday and the case was fixed for hearing the same day at 1:00pm. All law officers were surprised at the same-day listing of the case as they were not prepared to respond to the bench’s queries.

Before the start of the hearing, Islamabad police officials seemed worried that the bench would grill them on the withdrawal of the challan against TLP leaders in the trial court. But the bench did not raise a single query in this regard, restricting its whole focus to the performance of the Inter-Services Intelligence (ISI) during the sit-in.

At the start of the hearing, the bench asked Deputy Attorney General (DAG) Sohail Mahmood whether the ISI had submitted a fresh report on the bench’s queries about the TLP leadership’s sources of income as well their tax records, adding that the attorney general for Pakistan was not satisfied either with the agency’s earlier report.

The DAG confirmed that no fresh report had been submitted. Upon this, Justice Isa wondered how the country was operating and whether or not the intelligence agency was aware of their sources of income.

“Why should we not assume that an enemy country is financing them?” asked Justice Isa.

Justice Alam also questioned if an audit had been conducted.

Stressing that no one was above the law, Justice Isa wondered if “some people in the country consider themselves above the law as they do not submit reports to the court.”

The judge added that the “salaries of intelligence officials are also paid by the people of Pakistan”.

In his remarks, Justice Isa, who is in line to become the chief justice in 2023, observed that the “state should stand behind the victim, not the oppressor. Do we want a security state?”

Justice Isa also asked whether the country would have authoritarian rule, adding that judges were being targeted on social media after hearing of this case and the Constitution had been violated.

Justice Isa also lamented that the elephant in the room remained unacknowledged.

“Look at the history of how Pakistan came into being. It was not a result of the power of the gun,” he said, and referred to his parents, who played a pivotal role in the creation of Pakistan.

Colonel Falak Naz, a Ministry of Defence director who was present in court, could not answer the queries raised by the bench.

The bench then directed the defence secretary to appear with the attorney general on the next hearing. The bench also sought a comprehensive report on its queries.

Regarding the Pakistan Electronic Media Regulatory Authority (Pemra) report about the action against TV channels which violated the code of conduct during the sit-in, the bench noted that a mere advice had been issued and one channel had been censured for going beyond the area cordoned for the law enforcement agencies.

“We have noted with dismay the lack of action by Pemra on the complaints against various channels where serious breaches and violations of law were raised,” says the order.

Regarding the appointment of a Pemra chairman, the DAG informed the court that the process was under way. The court observed that on March 19, the SC had given the government four weeks to fill the vacant slot.

“The impediment in the way of appointment of Chairman of PEMRA has not been mentioned. Let the report of the Search Committee delegated to choose an appropriate candidate be placed on record.”

The bench asked the DAG to ensure that the order of the court for appointment of chairman was complied with, otherwise action would be taken against those responsible.

The court then adjourned the hearing for 10 days.

Imran accustomed to take orders from above, says Sharif