It is the story of a fierce strugg­le by an iron-willed indivi­dual determ­ined to change the course of histor­y
By Naeem-ul-Haque
Published: April 25, 2018
Tweet Email 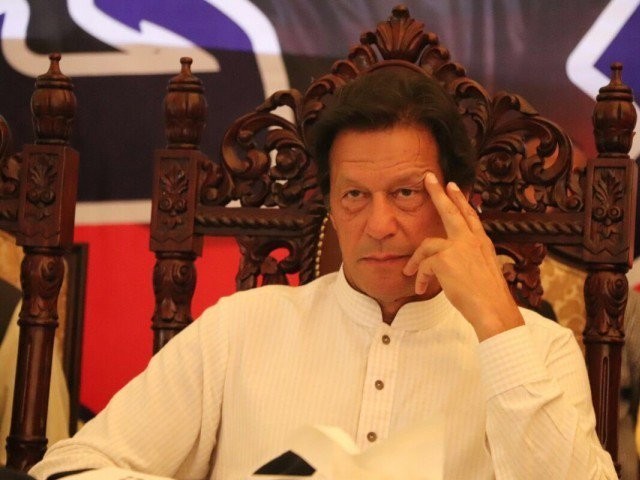 The PTI is the story of one man’s struggles against all. It is also the story of millions of followers who dedicated themselves to his vision and ideals to make the PTI the biggest political force in the history of Pakistan. It is an account of many ups and downs on the political ladder. It is the story of a fierce struggle by an iron-willed individual determined to change the course of history for his impoverished nation. Twenty-two years ago today, Imran Khan announced the launch of the Pakistan Tehreek-e-Insaf. After having seen the Pakistani society from close and observing the machinations and tyranny of the corrupt ruling elite, Imran had come to the conclusion that Pakistan needed a system whereby justice was available to everyone in every aspect of our national life.

Having been a national hero for over 40 years, Imran today stands as the champion of the oppressed and downtrodden determined to give them the rights which they have been denied since independence. Having seen two elected governments dismissed for corruption in 1990 and 1993, Imran felt that the scourge of this evil was destroying Pakistan and preventing the long overdue nation-building process. He felt that corruption must be fought and destroyed along with its main practitioners to create a just society where justice was available to all and an equitable distribution of national wealth was possible. He felt that corruption was sucking away the much-needed funds for fighting poverty, illiteracy and disease, and was the main impediment on the road to national development.

Soon after forming the PTI in April 1996, Imran had to rush to England where Ian Botham had filed a libel case against him and some precious time to build the party at home was wasted. Imran won the much-talked about case against Botham and returned home only to see the Benazir government dismissed once again in late 1996 by President Farooq Leghari for corruption and the general elections were scheduled within 90 days.

There was little time to prepare a young, inexperienced party for these elections and despite drawing big crowds, the PTI could not win any seats. This was primarily due to the completely inexperienced but clean candidates the PTI had put up but who had no idea how to fight elections. The next couple of years were of pure struggle to keep the party alive as few people stayed back in the party at the leadership level to sustain it.

In 1999, Musharraf’s overthrow of the Nawaz government was celebrated all over the country as a defeat for the latter’s naked ambition to become Amirul Momineen and install his family cronies all over, including the presidency. Imran welcomed Musharraf’s promise to return Pakistan to democracy and to clean up the mess of corruption.

But very soon Imran found himself getting disenchanted with Musharraf as the latter tried to form a coalition of corrupt politicians and invited Imran to join them. Imran flatly refused and the fraudulent referendum by Musharraf made him move away from the military government. In the 2002 elections, Imran could not face the might of Musharraf’s election machinery to rig the election in favour of his handpicked politicians and the PTI was restricted to one seat only — that of Imran.

In 2008, Musharraf’s deal with the PPP and the PML-N under pressure from America to whom he had offered blind support in the aftermath of 9/11 was completely unacceptable to Imran as he felt that these parties must be held accountable for their corruption and misdeeds before being allowed to contest. As a result, he boycotted the general elections of 2008.

Very soon the country started getting fed up with the traditional opportunistic politics being espoused by the PPP’s corrupt government of 2008 and the PML-N’s hypocritical assertions of political narcissism. The year 2011 saw a big surge of national sentiment in favour of the PTI and a massive jalsa at Minar-e-Pakistan in October 2011. Soon afterwards another big jalsa in Karachi saw a rush of older established politicians joining the PTI. The youth of the country overwhelmingly rushed to support Imran and were seen in massive numbers at PTI rallies. The party’s gates were now open and people were rushing in to join and be part of an exciting new force in Pakistani politics. The buildup to the 2013 election saw the biggest political rallies in the history of this country held by Imran Khan. But his fall during a massive rally just before the elections badly damaged the final thrust of its campaign as nine massive rallies were cancelled. The results of the 2013 elections were called by then president Zardari as ‘RO elections’, when he phoned Imran at the hospital and referred to the massive rigging in Punjab by ROs under a planned exercise by a coalition of powerful forces. The rest is history.

But the PTI managed to form the government in K-P, where it has achieved remarkable success in many areas and is almost certainly heading for a larger number of seats this year, breaking the tradition of the province of not electing a government twice in succession. During the last five years, the PTI fought two major legal battles in the Supreme Court. First, against the rigging of elections where the PTI got a mixed verdict and second against Nawaz’s corruption, removing him from the office of prime minister. These were perhaps the most remarkable cases in Pakistan’s legal history.

The campaign for the 2018 elections — billed as the biggest in Pakistan’s political history — has begun. He wants Pakistan to be a welfare state whereby the state assumes the primary responsibility for the welfare of the people in health, education, social welfare, youth training, jobs, poverty alleviation areas, etc. Imran by temperament has been anti-status quo and has adopted extremely independent positions on issues related to foreign affairs. He was the first Pakistani politician to oppose the presence of foreign troops in Afghanistan and Pakistan’s collaboration with the US forces holding the view that talks and not war was the solution to the Afghan problem, a stand which has been vindicated by the current events as the world acknowledges that peace through talks is the only way forward.

For the forthcoming election campaign a revolutionary programme will soon be announced aimed at capturing the hearts and minds of the masses and addressing the most critical issues our nation is facing. For Imran and the PTI the struggle for a better and more prosperous Pakistan continues.