Water shortage: The next great war – we need to get ready

Water shortage: The next great war – we need to get ready

If we do not act now, power shorta­ges will be the least of our proble­ms.
By Sarah Farid
Published: May 16, 2011
Tweet Email 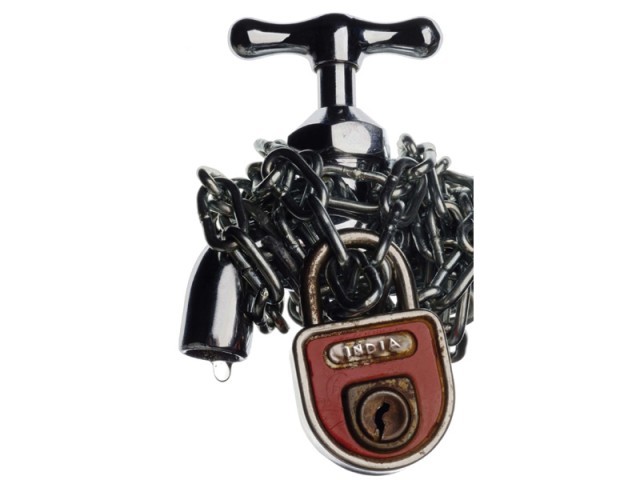 If we do not act now, power shortages will be the least of our problems. DESIGN: S.JAMAL

How will this affect me? That is the silent thought that echoes through our heads. Or, it’s not your fault. Our brains have been programmed to think as such — the urge to do so heightened by functioning in an increasingly globalised, competitive and cut-throat world.

Remember the flood tax that reduced your take-home income? How about the increasing inflation that reduces the net worth of savings by tiny fractions that add up throughout the year? How about losing the semi-finals to India even?

Time to wake up and smell the fresh, or as the case might be- pungent, putrid air.

After torrential rains and flooding occured, the mighty Indus swelled to the highest water level it had reached in 110 years. Millions were displaced and billions of dollars were lost. It is unfeasible for the country to immediately reverse the damage. An effective water management strategy is needed to store excess water and protect us against droughts or floods. This was last year’s scenario.

A repeat performance can be expected any time, this year, the next, or the year after that. Who can really predict the future? But we can prepare for it. Experts say this is only the start of a trend that is likely to continue over decades. To stem the flow of the tide and convert the threat into an opportunity, Pakistan needs to step up — fast. Complacence has a heavy price attached to its head.

The struggle for resources has led man to the juncture where energy, water and food can be speculated to be the most desired commodities of the next century. Water is the building block of life itself, so harnessing its immense power today is the need of the hour. Our hands need to stop furiously writing away cheques to purchase imported cars and traveling to far-off exotic locations to live in luxury for a while. When coming back to reality, our problems are not new and will only become worse with time.

Squabbling and making a scene in front of world regulatory bodies will not win respect. The rapid growth of India as a rising superpower will not serve in Pakistan’s interests either. Lost in manoeuvring through our trade deficits and outstanding loans, we need to realise that neglecting plans to store water in the future will cause undue harm today or tomorrow.

For the second time since the Indus Water Treaty was drafted in 1960, Pakistan has challenged India over its constructions of dams. Alarm and concern has been in the air alongside efforts to thwart India’s plans. Under the treaty, India gets exclusive control of the Eastern Rivers — the Sutlej, the Beas and the Ravi. Pakistan maintains exclusive control over the Western Rivers — the Indus, the Jhelum and the Chenab. The Kishanganga dam project will divert waters from the Jhelum into India’s own fields, making 5.6 million acres of land in Pakistan-owned Punjab barren. Taking this to international agencies for arbitration to stop this dam has not proved fruitful as India is proceeding with its 330-megawatt hydro-electric project.

Learning by example is the simplest way to succeed. The tried and tested is the best strategy to adopt in certain cases. Dam construction in India has seen staggering growth — from 300 dams in 1947 to an astounding 4,000 large and small dams at the turn of the last century, half of which were built between 1971 and 1989. India’s investment has certainly paid off — in terms of prevention of floods, supplying water for irrigation and generation of electricity.

With the 2011 monsoon season around the corner, one can only hope for the best. The point to note here is not that climate change should be highlighted more but that for once brainstorming to produce a national strategy should be done by individuals on a level where there is a clear understanding of issues. Unification in the advent of impending doom is an inherent feature of the evolution of communities — why then should we be any different? Personal rivalries and serving self-interest needs to go at some level so collective good has a trickle-down effect to benefit people on an individual level. Otherwise, soon we will be begging other nations for imported water after devastating floods have drowned the country year after year.

A New York Times article draws a grim picture of the scenario. Global climate change has widespread consequences — from floods in Pakistan to the record heatwave in Russia and flooding and mudslides in western China, said Ghassem Asrar, director of the World Climate Research Programme and World Meteorological Organisation (WMO). Furthermore, if the forecasts by the Intergovernmental Panel on Climate Change (IPCC) are correct, then Pakistan’s misery is just a sign of more to come, stated Asrar.

Prevention is better than cure, says an old adage. Yet the Pakistani nation remains attuned to slumber until disaster shocks them into wakefulness. Preemptive attempts are lost in translation — during the overheated debates of the elite, amongst the corrupt practices of the powerful or somewhere in the grueling workload of the impoverished.

Development strategies need to be progressive and strategic – not reactionary. Climate change and environmental degradation are confined by the mindsets that set it as the last priority on a long list. Now these are the problems, which everyone harps about, you might think. The solution is evident but the means to attain it remain blurry. Unification under a national umbrella to draft strategies made by qualified recommendations, obtaining the funding and implementing it wholeheartedly is the only long-term solution. Even if this year goes by safely, two or three years down, another flood could wipe our economic growth clean. Irrespective of the frequent political instability that threaten to reverse progressive trends in order to downplay the other’s achievements, forces must unite to devise a permanent solution to ease the anticipated water shortage that will arise in the next few decades.

The writers is a graduate from Rice University, Houston, TX with a degree in Economics and Policy Studies