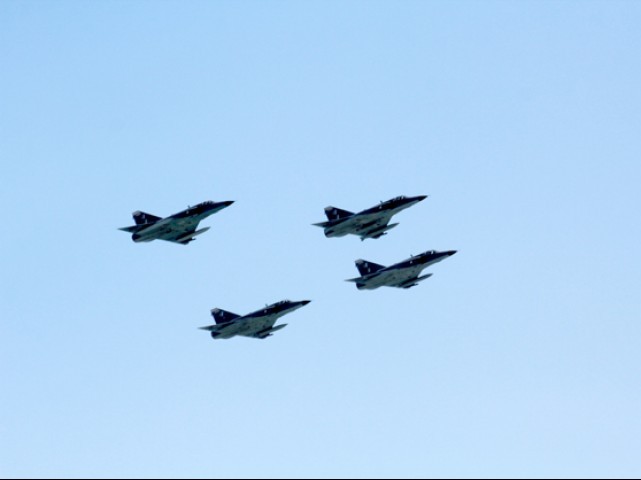 ISLAMABAD: The federal cabinet has approved an expansionary fiscal policy that offers little for development but gives away more than half of the estimated budget of Rs5.237 trillion for new fiscal year to meet the growing needs of defence as well as debt servicing.

The cabinet on Tuesday approved Rs1.1 trillion for regular defence budget and another Rs100 billion for Armed Forces Development Programme (AFDP) – a sum of Rs1.2 trillion that is equal to 23% of the proposed total budget of Rs5.237 trillion.

Another amount of Rs1.607 trillion or 30.7% of the proposed budget has been earmarked for debt serving. The original debt servicing cost in the outgoing fiscal year was Rs1.364 trillion which has now jacked by Rs243 billion or 17.8% for the next year.

“The defence and debt serving would consume 53.7% or Rs2.8 trillion out of Rs5.237 trillion,” a cabinet minister told The Express Tribune. The Rs5.237 trillion overall size of the budget is 10% or Rs484 billion higher than the previous year’s original budget approved by parliament in June last year.

“The sustained income and revenue streams will benefit the country instead of obtaining loans,” said Prime Minister Shahid Khaqan Abbasi while chairing the meeting.

The record borrowings have remained a hallmark of the Pakistan Muslim League-Nawaz (PML-N) government during the past five years. The cabinet approved Rs4.435 trillion tax collection target for the Federal Board of Revenue (FBR).

The PM decided to increase the federal development budget to Rs800 billion against the finance ministry’s proposal of Rs750 billion for the next year.

The Rs800 billion is only 15.2% of the proposed budget which the government will unveil on April 27. But it is still Rs201 billion less than the outgoing fiscal year’s original development budget.

The government has opted for an expansionary fiscal policy ahead of the next general elections. But for the first time in five years, the outgoing government has tried to present relatively realistic budget figures, moving away from the policy of understating the expenditures at the time of the budget.

“For achieving a sustainable high economic growth rate, a little expansionary fiscal policy is required for next fiscal year,” said Adviser to PM on Finance Dr Miftah Ismail while talking to The Express Tribune. He said the economy should not be slowed down just because of fiscal tightening.

At Rs998 billion, the government has given 10.2% increase to the military which, according to Ismail, is an ordinary increase and in line with the increase in running the civilian government expenditures.

An additional Rs100 billion has been proposed for the Armed Forces Development Programme. On Monday, Ismail had said the defence budget would get a regular increase and there would be no extraordinary increase in the defence budget.

Pakistan in talks with Russia for procurement of sophisticated arms, says defence minister

Another main expense is on account of pension including military’s, as the cabinet approved Rs342 billion or 6.5% of the proposed budget under this head.

In the outgoing fiscal year, former finance minister Ishaq Dar had set aside Rs248 billion for pensions which the finance ministry has now revised upward to Rs320 billion.

For subsidies, the government has proposed Rs179 billion in the next budget which is up from Rs144 billion revised budget for the outgoing year. For grants and other expenditures, Rs624 billion has been proposed for the next year as against Rs550 billion original budget for the outgoing fiscal year. The net lending has been reduced from Rs123 billion to Rs78 billion for the next budget.