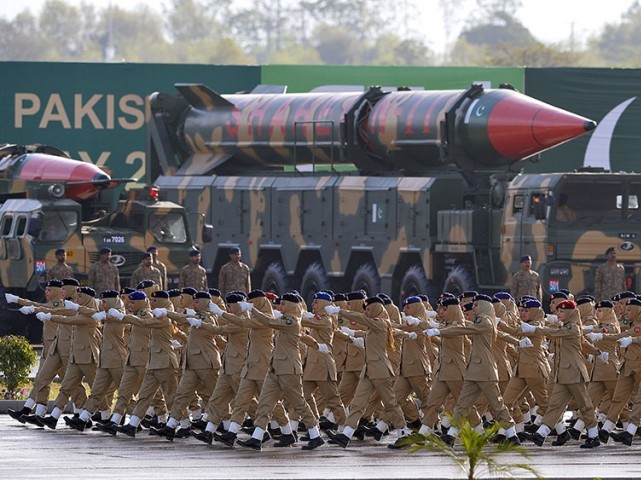 ISLAMABAD: The military will get only a regular increase and there will be no unusual increase in the defence budget for the next fiscal year, the adviser to the prime minister on finance said on Monday.

The announcement came in response to expectations that the defence budget could get an extraordinary increase in the wake of the approval of a new Armed Forces Development Plan.

“The defence budget will get a regular increase and there will not be any extraordinary increase in the defence budget”, Dr Miftah Ismail told media persons after addressing a conference on Pakistan’s investment potential.

Pakistan in talks with Russia for procurement of sophisticated arms, says defence minister

They said that the military had demanded higher than Rs920 billion budget for the outgoing fiscal year. But the former Finance Minister had promised that additional budget would be given during the course of the fiscal year, said the sources.

Dr Miftah Ismail said that the government would substantially increase pensions for retired employees on the instruction of Prime Minister Shahid Khaqan Abbasi.

In order to compensate losses to the tax base because of the three-fold increase in income tax exemption threshold, the government will give one million more potential taxpayers to the FBR, said the adviser.

He said that these people have been identified by National Database and Registration Authority through their consumption patterns.

From July this year, the government will increase the income tax exemption threshold from annual incomes of Rs400,000 to Rs1.2 million. This would erase 522,000 income tax return filers out of 1.26 million.

Former finance minister Ishaq Dar also made a similar claim regarding bringing 700,000 new individuals under the tax net with the help of NADRA. But nothing happened.

The adviser said that the government had introduced the most fundamental reform in the real estate sector: Nobody would be allowed to buy a property from July 1 without having a valid National Tax Number.

For the fiscal year 2018-19, the government will have the right to acquire any property by paying 100 per cent additional price of its declared value.

This would ensure people to register properties at least at 50 per cent of the market rate, which will be far higher than the prevailing FBR-determined property valuation rates, said the adviser.

He said that another restriction would be imposed on buying property.

The budget is expected to be announced on April 27.

The government, he said, was also eliminating FBR’s tax rates for buying and selling of properties. He said that against the 3% and 4% withholding tax rates, the people will have the option to register their properties by paying only 1% withholding tax at an adjustable rate.

The Adviser said that the federal government was also trying to persuade provinces to cut their deputy collector rates to only 1%. “We have a feeling that we will prevail upon the provinces”, he added.

Dr Ismail said that the government was in contact with the PPP and PTI on the issue of next year’s budget but PTI’s top leader had suddenly announced that his party would not present a budget in Khyber-Pakhtunkhwa.

According to the adviser, there was access supply of goods in the market, therefore, inflation had not increased despite a 10 per cent devaluation of rupee against the US dollar. The government, he said, had set an inflation target at 6 per cent for the new fiscal year.

He said that the economic growth rate of 5.8 per cent would ensure that all new entrants in the job market were absorbed, said the de-facto finance minister.

But to make a big dent in poverty, Pakistan will have to grow at a pace of 8 per cent or more, said Dr Ismail.