Malnut­rition, poor health servic­es cited as cause of deaths; health offici­als not up for commen­ts
By Z Ali
Published: April 17, 2018
Tweet Email 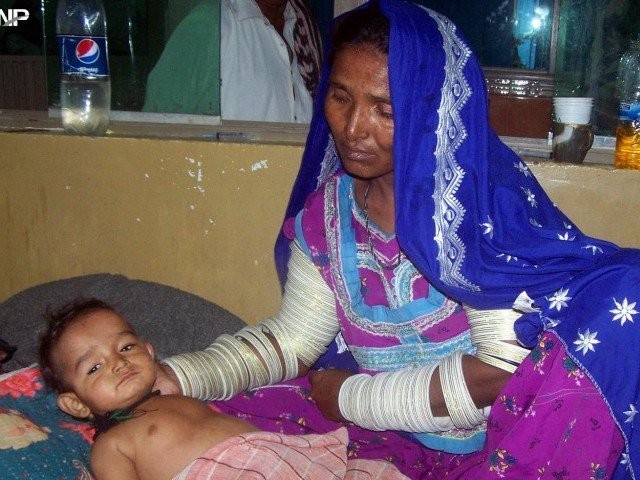 According to a recent Unicef report, Pakistan tops the UN children agency’s list of 10 countries which have the highest infant mortality, with 46 newborns out of 1,000 dying within the first month of their birth. PHOTO: INP

According to unconfirmed reports, 27 children have died in the Civil Hospital Mithi alone in the first 16 days of this month. Many deaths have also reportedly occurred in dozens of other health centres as well as in the remote villages.

Four children died in the civil hospital on Monday according to a hospital’s staffer who requested anonymity. The deceased were eight-month-old Mansha, nine-month-old Mubarak and two newborns of Haji Muhammad.

Around 10 children died in the same hospital last week, according to unofficial sources. Most of the deceased were less than one year old.

“Underweight children born to malnourished mothers require medical help to survive. Unfortunately, the standards of the medical intervention required are lacking,” a paediatrician, working with a leading private hospital who visits Tharparkar’s hospitals and health centers quite often, commented on the condition of anonymity.

“The leading cause of infant mortality is premature birth, complication at the time of birth or infections.” According to him, all these conditions are mostly curable if the medical practitioners could be equipped with the skills and the health facility with medicines and equipment.

Akbar Gaho, father of one-year-old Noshad who died in the hospital two days ago, alleged that his son died due to negligence of the doctors. “His health condition didn’t look so critical. But the doctors delayed in starting his medical treatment,” claimed Gaho, a resident of a village in Islamkot taluka.

His family and neighbours also staged a protest against the doctors of Civil Hospital in Mithi on Saturday and demanded an inquiry. Haji Muhammad, whose newborns died on Monday, also complained of inadequate facilities and sullen attitude of the hospital’s staff while talking to media. The local health officials were not available for comments.

According to a recent Unicef report, Pakistan tops the UN children agency’s list of 10 countries which have the highest infant mortality, with 46 newborns out of 1,000 dying within the first month of their birth.

Among these countries, eight are in Africa and two in Asia, including Afghanistan, which is ranked at the third place.

“Pakistan is the riskiest place to be born as measured by its newborn mortality rate,” states the report. “A baby born in Pakistan is almost 50 times more likely to die during his or her first month than a baby born in Japan, Iceland and Singapore.”

The Unicef has also pointed out that “access to maternal and newborn health services provided by skilled health providers correlate strongly with high newborn mortality rates”.

Drought-like conditions persist in Tharparkar. The provincial government announced distribution of subsidised wheat for the district last month. But the local people complain that the wheat distribution has still not started.