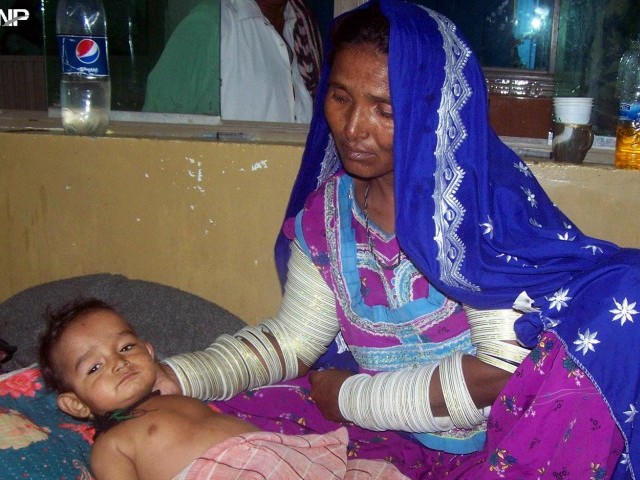 A Thari woman tends to her sick child at the Civil Hospital in Hyderabad. PHOTO: INP

KARACHI: The provincial health authorities admitted before the Sindh High Court (SHC) on Thursday that 1,340 children have died in drought-hit areas of Tharparkar since 2014.

Therefore, a two-judge bench directed the provincial chief secretary, health secretary and others to submit a detailed report on implementation of the court-appointed commission’s recommendations to mitigate the situation in the desert region. They will submit the report within two weeks.

Earlier, reports were filed by the secretaries of the provincial health and food departments. The food secretary informed the judges that free wheat had been distributed among the people in the drought-hit areas in 10 phases so far. He said a summary for the procurement of 270,000 wheat bags had been sent to the chief minister for approval.

The health secretary informed the court that there was an acute shortage of expert doctors and paramedical staff in Tharparkar district.

He said that 332 out of the total 517 posts of specialist doctors, surgeons and other experts were lying vacant in the district. The secretary said four posts of surgeons were vacant.

The court was informed that 462,000 children had been brought to the out-patient department at the Mithi District Headquarters Hospital since 2014. The judges were also told that 1,340 children had died since 2014. These included 341 underweight children below five years of age. The report stated that 36 children died from respiratory diseases, 36 from malnutrition and 14 from diarrhoea.

The secretary maintained that the provincial government had re-doubled the annual budgetary allocations of government hospitals in Thar.

He added that the government was working on several long-term schemes aimed at poverty alleviation, women education, provision of clean drinking water, better sanitation and improving living standards and means of communication in the district.

The bench directed the provincial chief secretary, the health and food secretaries and others to submit a detailed report on implementation of the recommendations of the court-appointed commission to mitigate the situation in Thar. They will submit the report in two weeks.