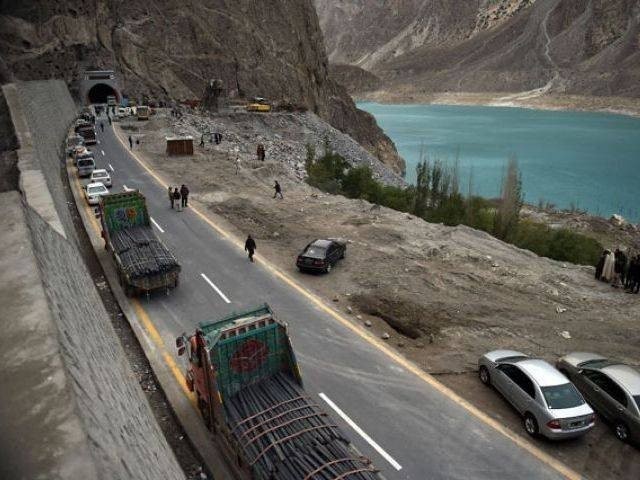 ISLAMABAD: Imagine a part of the world where a two-year road construction project is still under way after 14 long years. Moreover it is just a 50km section of a 2-lane motorway.

No, this is not the story of an infrastructure project in Sub-Saharan Africa. This is the state of affairs in the Khuzdar-Shahdad Kot section of motorway M8 – which is still incomplete, almost one-and-a-half decade after it was announced to great fanfare. This section connects Sindh with Balochistan, so it is one of the main arteries of the China-Pakistan Economic Corridor (CPEC) route.

CPEC Western route to be completed by end of this year

While the Frontier Works Organization (FWO) has ramped up operations in other packages of section IV, one 51km long package being built by Nazir-AMC sits silent and is still nowhere close to completion.

Earlier, the National Highway Authority (NHA) had decided to terminate the contract and sought bid from FWO for the completion of remaining work in this package. Normally, in case of arbitration, the Public Procurement Regulatory Authority (PPRA) has statutes that protect the purchaser i.e. the government, in this case, from contractors who fail to oblige terms and conditions pertaining to risk and cost.

However, the contractor managed to obtain a stay order from the Lahore High Court. In order to avoid further delays, the NHA finally resorted to continue the same contract with Nazir-AMC. The contractor then requested to re-rate the contract on the pretext that the original rates were too low and unworkable.

This re-rating of contract items cost taxpayers another Rs290 million. While this amount might look insignificant in broader economic terms; it does not bode well for the present tax regime that is all geared up to widen the tax net.

Similarly, the project of constructing 100+ family suites at the Parliament Lodges, Islamabad has been put on the back burner for over half a decade. When the Capital Development Authority (CDA) canceled the agreement, the contractor obtained a stay order from court and the project has been put on hold since then.

So the question of the hour is: Why contractors do that and what government should do about it?

Very often, contractors bid considerably below the reasonable estimate and once they grab lucrative contracts, they use all weapons in their arsenal such as extension of time, variation orders, re-rating of components, etc to make hefty profits. When project owners attempt to use ‘termination for convenience’ clause, contractors seek stay orders from courts – prohibiting the sponsoring agency to re-tender the project.

One of the reasons for time delays in infrastructure projects is late engagement of supervising consultants and poor contract administration. In many cases, the performance bond clause is not respected making it difficult to penalise the contractor in case of nonperformance. Condition surveys are not often conducted in depth which later leads to unnecessary variation orders.

The FIDIC red book 1999 contains ‘termination for convenience’ clauses that allow governments in public sector standard contracts to terminate the contract at any time but excludes the contractor’s entitlement to compensation for loss of profit, if any. The FIDIC contract at clause 8.7 entitles government to levy damages on the contractor for each day of delay after the stipulated time for completion.

The NHA can consider some amendments to FIDIC general conditions and NHA code for better management of megaprojects. For example, NHA can include ‘de-scoping’ clauses that allow reducing the contracted scope of work without terminating the contract altogether. Similarly NHA can include a bonus provision for contractor if it completes the project ahead of schedule. NHA could also incorporate a clause of ‘right to step-in’ ie to take over work or any part thereof if progress is behind schedule; and enforce the contractor to add similar clauses in case of subcontracts .

There is also a need to enforce whistle-blowing policies in order to reinforce internal controls. Last but not the least, the internal audit needs to ask some tough questions like “why rains cost the project so much money?” You may never know that rains might have raised moisture content in the gravel and the contractor might have been billing without adjusting the price for moisture content.