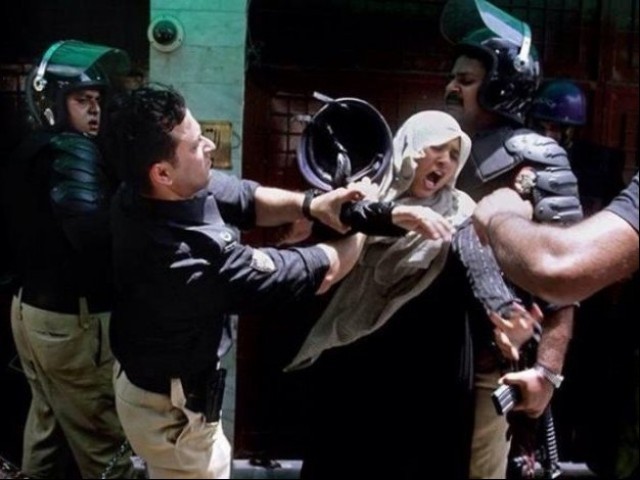 A file photo of the Model Town clashes between police and PAT activists in 2014.

The order was passed after the Pakistan Awami Tehreek (PAT) and the Minhajul Quran filed a private complaint against the delay in adjudication of the case.

A two-member bench of the top court, headed by Chief Justice of Pakistan (CJP) Mian Saqib Nisar, directed the presiding officer of the anti-terrorism court, Ijaz Awan, to hold proceedings on all days of the week, except Sundays.

The chief justice also directed authorities concerned to transfer all cases pending before the judge to another court or establish a new court for their disposal.

He also directed the advocate general of Punjab to submit the report compiled by Justice Ali Baqar Najafi which was produced before the court after the proceedings concluded.

Earlier, the bench was briefed by the advocate general about the proceedings of the trial before the anti-terrorism court and the Lahore High Court.

PAT’s counsel Rai Bashir said the case had been lingering for a long time without any progress.

However, the prosecutor general informed the bench that this was because the PAT’s counsel often remained absent during the hearings of the case in the LHC.

To that, the CJP directed the high court to decide all pending appeals within 15 days and disposed of the suo motu notice.

Last Sunday,  Justice Nisar took suo motu notice on the delay in dispensation of justice to heirs of victims of the Model Town incident and summoned record of the case from the trial court after he passed by a crowd of protestors seeking justice in the case.

A number of petitions and appeals are also pending before the Lahore High Court (LHC) on the issue.

Also on Saturday, the CJP said the court would prefer an independent forensic audit of Pakistan Railways.

The apex court, he said, would decide next week which company should be suitable for this task.

“Judges are without any prejudice unlike what your friends suggest,” the CJP remarked. “This is for the first time that the rule of law is being established and certain ‘other’ elements are in trouble,” he said.

Railways Minister Saad Rafiq responded by saying that he had no problem with the audit and requested the CJP to visit the Railways headquarters to personally examine steps taken during his tenure as minister.

The CJP also snubbed the minister for maintaining a relaxed posture while standing near the rostrum. He urged the minister not to even think about disrespecting the institution.

The minister responded by saying that he was jailed during the movement for restoration of judiciary and deeply respected the institution.

The CJP warned: “Be careful. You can yet again go to jail.”

Rafique submitted a report about his department’s performance. He said he had saved the railways from privatisation by violating his own party’s policy.

Although all was still not well at railways, inadequacies had been minimised, he said, adding that it would take at least 12 years for the railways to overcome losses.

During the proceedings, railways secretary Parveen Agha termed payment of pensions one of the major reasons of railways losses.

“As much as Rs30.2 billion is being paid every year to retired railways’ employees as pension,” the secretary said.

However, the CJP rejected the arguments and observed that the railways should have generated revenue to meet the expenses of pensions.

“How long will railways be run on bailout packages?” the CJP asked the secretary.

Justice Ijazul Ahsan, another member of the bench, asked the officer to look at the progress made by Indian railways.

The bench directed the minister and the secretary to submit a written reply about the losses of railways by next week.