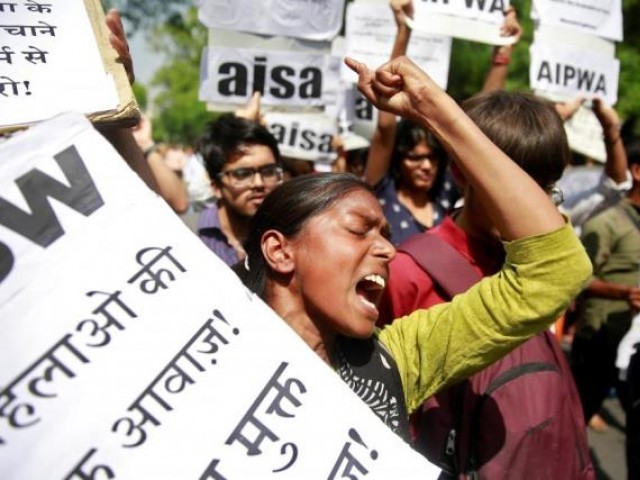 A woman reacts at a protest against the rape of an eight-year-old girl, in Kathua, near Jammu and a teenager in Unnao, Uttar Pradesh state, in New Delhi on April 12, 2018. PHOTO: REUTERS

Opposition parties have already seized on the attack in India’s most populous state, Uttar Pradesh in the north, which is ruled by a rising star of Modi’s Bharatiya Janata Party (BJP).

The rape in the city of Unnao might never have seen the light of day, had the victim not tried to set fire to herself last week outside the residence of the chief minister in the state capital of Lucknow.

She was stopped by guards, but the suicide attempt brought to public attention her accusations against Kuldeep Singh Sengar, a longstanding member of the state legislature for the BJP.

Ajay Pal Singh, the lawyer for Sengar, said the allegations against the legislator were baseless and that investigations would prove his innocence.

“This case is a conspiracy to malign Sengar and disrupt his political career,” Singh told Reuters.

The death of a young woman following a brutal gang rape in Delhi in 2012 sparked an outpouring of national shame and anger, but violence against women in India remains as rampant as ever.

The country has also been shocked by the filing of a charges this week in the state of Jammu and Kashmir alleging the abduction and rape of an eight-year-old Muslim girl in a Hindu-dominated area in January.

The state’s chief minister said on Twitter on Thursday that investigations were on “fast track & justice will be delivered”.

India registered about 40,000 rape cases in 2016, according to latest available reports from the National Crime Records Bureau, compared with 25,000 cases in 2012. Rights activists say thousands of rapes go unreported because of the stigma.

How Uttar Pradesh Chief Minister Yogi Adityanath handles the allegations against his party man is being dissected by national media keen to see whether justice takes its course.

Adityanath on Thursday asked the CBI, the equivalent to the FBI in the United States, to take over the Unnao case, police said.

“We have collected crucial evidence and handed over all the details to the CBI to further investigate the case,” said O.P. Singh, the most senior police officer in Uttar Pradesh.

The rape victim told reporters at her residence that Sengar should be arrested to prevent him from influencing the investigation.

Up until now, police had refused to investigate the victim’s accusations, she said. In a bizarre sequence of events, the victim’s father died in police custody this week, fanning suspicion that Sengar was somehow involved.

The victim’s father had been beaten before being taken into custody following a complaint by his assailants. Police officer Singh said they have launched an investigation into accusations that Sengar played a role in the assault.

Police have suspended several officers in Unnao during the past few days pending investigations into their conduct, another senior police official said.

“Speak up: the very soul of womanhood violated at Kathua (Jammu and Kashmir) and Unnao,” said Kapil Sibal, a former federal minister and a leader of the opposition Congress party.