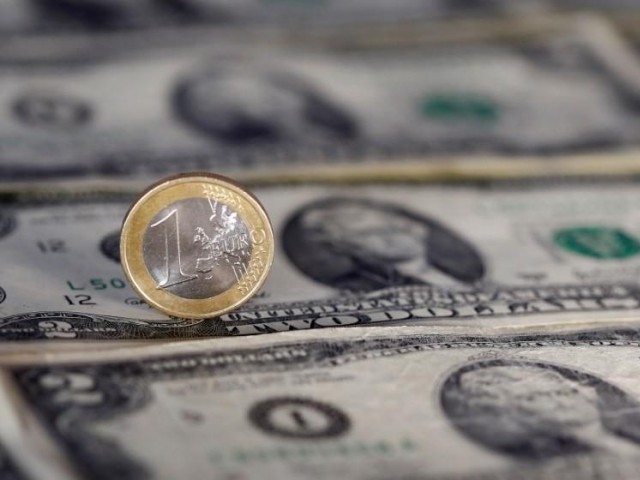 U.S. dollar note and a Euro coin are seen in this picture illustration. PHOTO: REUTERS

KARACHI: The pace of foreign loan accumulation grew in 2017 as Pakistan acquired $6.9 billion during the year in a bid to finance swelling imports and repay external debt following failure to bridge the fiscal deficit due to low exports and insignificant increase in worker remittances.

The $6.9-billion borrowing is the single largest annual accumulation of external debt in the past four years, according to the State Bank of Pakistan’s second quarter report on the state of economy.

The fresh debt included the $669.3 million that was added due to weakening US dollar against other major international currencies and rupee depreciation against the dollar in the first half (July-December) of the current fiscal year 2017-18.

However, the total debt of $66.9 billion did not include the debt servicing cost of $2.27 billion in the half year.

Pakistan’s stock of external public debt rose $4.3 billion in the first half of FY18, reaching $66.9 billion at the end of December 2017.

“Despite higher repayments, the increase in external debt was largely due to $2.5 billion mobilised through Eurobond/Sukuk issuance and borrowing from commercial banks during the period,” it said.

In addition to this, strengthening of other currencies against the dollar resulted in $669.3 million worth of revaluation losses. Specifically, the dollar weakened against the euro and Special Drawing Rights (SDR) by 4.9% and 2.3% respectively, which added significantly to the dollar value of Pakistan’s external debt.

Gross loan disbursements increased 44% to $5.69 billion in the first half of FY18. “Around two-thirds of the inflows came from bond issuance (worth $2.5 billion) and government borrowing from foreign commercial banks ($1.16 billion),” it said.

In addition to the commercial borrowing, the support from multilateral donors came largely for energy and infrastructure projects.

Within bilateral loans, major inflow came from China ($506.9 million) which was meant for infrastructure projects under the China-Pakistan Economic Corridor (CPEC).

The central bank, however, pointed out that the Eurobond/Sukuk issuance was oversubscribed by more than $8 billion. The investor base was also quite diversified with 44% from Europe, 24% from Asia, 20% from North America, 8% from the Middle East and 12% from other regions.

Encouragingly, the rate of return on 10-year bonds was lower compared with the fixed-rate bonds issued over the past 10 years. This development bodes well in terms of lengthening the maturity profile, cost effectiveness and interest rate risks on the external debt portfolio.

The servicing of external public debt was higher by $720.2 million to $2.27 billion in the first half of FY18 compared to $1.55 billion in the same period of last year.

“The main servicing burden was due to repayment of foreign commercial loans that reached around $537.4 million during 1HFY18. In addition, the repayment to the Paris Club and other multilateral donors also increased significantly during the period,” it said.