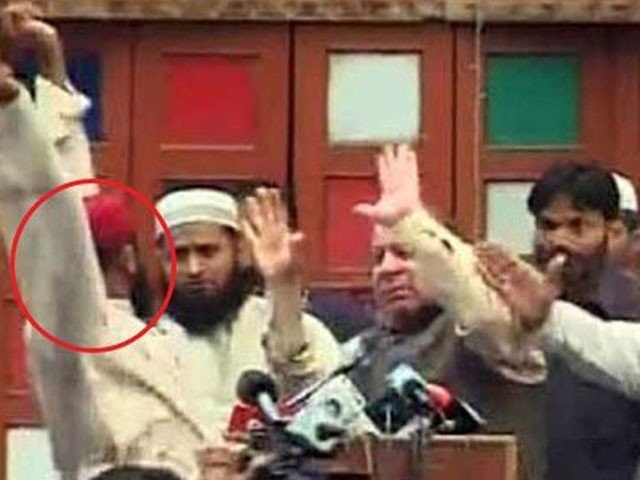 A judicial magistrate has ordered to release all three suspects of hurling shoes at former prime minister Nawaz Sharif on bail against Rs100,000 surety bonds each, Express News reported.

Suspects Sajid, Munawar and Abdul Ghafoor alias Falki were arrested after they attempted to insult the Pakistan Muslim League-Nawaz (PML-N) supremo at a ceremony to mark the death anniversary of slain religious scholar Sarfaraz Naeemi at Jamia Naeemia in Lahore last month.

The attack was apparently a well-coordinated effort to reopen the chapter of controversial amendments regarding the Finality of Prophethood that had recently ended with the resignation of Zahid Hamid as federal law minister.

Just as Sharif got to the podium, one of the suspects, Falki, hurled a shoe towards him, which landed reasonably far away from Sharif. Moments later, Munawar tossed his shoe towards Sharif. The shoe hit him in the chest before bouncing into his neck and cheek. Immediately afterwards, the man stepped up on the stage chanting a religious slogan.

Sharif’s private guards and event organisers overpowered the man, pinned him to the floor, and thrashed him. As the man was being beaten, several other students began shouting the same slogan.

A few minutes after the entire episode, Sharif went back to the podium to make a brief address. He said his family had longstanding relations with the Naeemi family, and that they had learned a great deal from Mufti Muhammad Naeemi and Ragib Naeemi.

The deposed PM said he still remembered when the seminary was being built and the effort involved, before concluding with thanks to the seminary administration for inviting him.

He made no mention of the shoes or the attackers.

The incident was condemned across the political spectrum, with PML-N friends and foes all noting that such behavior had no space in political discourse.

Hafiz Saeed mocks US ban on MML, says party’s credibility ‘has been proved’