'90% of Mohen Jo Daro ruins yet to be excavated'

'90% of Mohen Jo Daro ruins yet to be excavated' 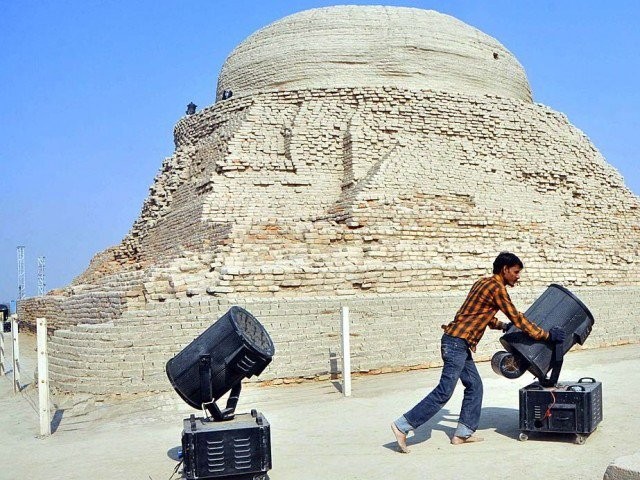 German archaeologist Prof Dr Michael Jansen has said that around 90% of the ruins of Mohen Jo Daro in Larkana district have yet to be excavated. Delivering a lecture at Sindh University (SU) on Tuesday, Dr Jansen said Mohen Jo Daro stood out from other contemporary civilisations due to its well-planned water supply and drainage systems.

The lecture was titled ‘The case study of Mohen Jo Daro, the largest bronze age city of the world’. He noted that the Indus Valley civilisation shared many similarities with Egyptian, Mesopotamian and Harrapan civilisations. “Mohen Jo Daro was one of the most modern, well-planned, hygienic and developed cities of its own age.” According to him, some recent findings suggest contact between the Indus Valley and Oman civilisation.

Dr Jansen said that seals bearing female figurines symbolising fertility and prosperity were discovered from the remains of the Mesopotamian and Indus civilizations. “I am convinced that understanding, conserving and further investigating the Indus Valley civilisation is not only a national, but an international concern and that the need to establish and functionalise the International Centre for Indus Valley Integrated Studies (CIVIS) is fully justified,” he said.

Earlier, an agreement was also signed to make CIVIS operational at SU. Dr Jansen, who represented the Oman-based Research Centre Indian Ocean (RIO), the German Research Centre and the SU were the signatories. A group of archaeologists, who recently met at the United Nations Educational, Scientific and Cultural Organisation, recommended the establishment of CIVIS, which will bring together scientists and other national and international organisations for research on Mohen Jo Daro.

The centre will explore the culture, archaeology, anthropology, architecture, geology, history and Sindhology of the site, while Indus Valley Data Resource Unit will also be established at the centre. The unit will display artefacts, reports, research papers, books and digital archives.