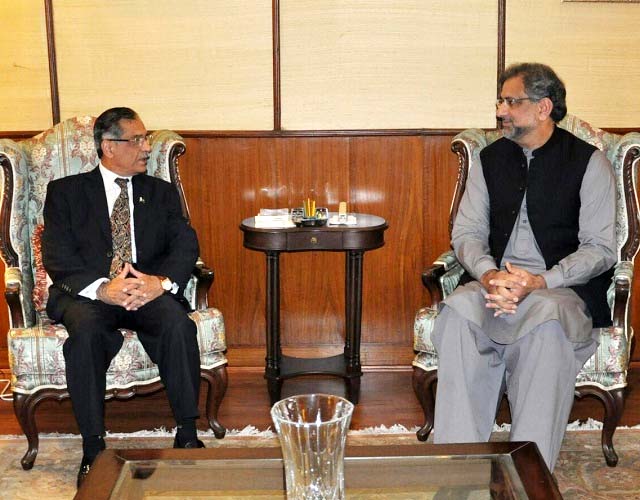 PM Abbasi assures CJP Nisar all possible assistance in revamping judicial system of the country as visualised by the chief justice. PHOTO: EXPRESS

ISLAMABAD: Prime Minister Shahid Khaqan Abbasi has assured Chief Justice of Pakistan (CJP) Mian Saqib Nisar that all steps will be taken to make the adjudicator’s ‘vision’ a reality.

The PM has assured that all steps will be taken to achieve the vision of the chief justice with respect to free education, provision of quality and affordable health services, revamping of medical education, provision of clean drinking water, better sanitation, and environmental protection, according to a statement issued by the Supreme Court PRO soon after a two-hour-long meeting between the PM and the CJP.

In return, the chief justice also assured that the “judiciary will continue to perform its constitutional duties independently, fairly, transparently, without fear or favour and strictly in accordance with the law”.

Legal wizards believe that the statement attributed to the CJP is significant because it shows that the apex court will not become a party to any ‘great game’. Likewise, he is completely rejecting PML-N supporters’ claims that the judiciary is acting in the interest or at the behest of non-democratic forces.

What can be done against Nawaz Sharif, he is nobody now: CJP

In a rare move, the PM arrived at the Supreme Court without any protocol for a one-on-one meeting with the chief justice. The meeting has surprised many, even in the ruling party.

A senior government official expects a ceasefire from both sides after the meeting.

However, one section of the PML-N, which is handling the legal matters of Sharif family, has taken strong exception over the meeting between the PM and the CJP.

Talking to The Express Tribune, a senior PML-N leader, having read the official statement, suggests that the judiciary has given a comeback as it is favouring the CJP rather than the political incumbent.

“Everything the superior judiciary has done so far with the PML-N leadership stands fully endorsed by the top political man,” says the senior PML-N leader.

However, the Shehbaz Sharif camp is was jubilant over the meeting.

PTI Information Secretary Fawad Chaudhry, while talking to The Express Tribune, expressed concern over the ‘unusual’ meeting and said there was no precedent for any such meetings between the heads of the executive and the judiciary.

“The PM and his party criticised the judiciary day in day out. Let’s see if there will be a change of heart,” he added.

According to the statement, the meeting in the CJP’s chambers was arranged on the request of the prime minister, through Attorney General for Pakistan Ashtar Ausaf Ali.

Ali told The Express Tribune that the meeting went well. “Pakistan was the agenda of the meeting between two heads of institutions.”

APTI expresses concern over ‘effort’ to bail out Sharif

According to the SC statement, the PM also showed keen interest in providing all possible assistance in revamping the judicial system of Pakistan as envisioned by the chief justice.

The PM also assured the CJP that the government would provide all resources to the judiciary in order to enable it to provide speedy and inexpensive justice in addition to facilitating people in getting easy access to justice.

The PM also highlighted the difficulties of the Federal Board of Revenue and the Tax Department on account of pendency of litigation involving revenue in different courts.

Justice Nisar assured the PM that he would look into the matter and such litigation would be fast-tracked.

On February 16, 2010, former prime minister Yousuf Raza Gillani had also made a surprise visit to the SC premises while former CJP Iftikhar Muhammad Chaudhry was hosting a dinner on the retirement of Justice Khalilur Rehman Ramday. The following day, the CJP had gone to the PM’s Secretariat to resolve some legal affairs.

Legal experts believe that the outcome of the meeting will be seen through the future actions from both sides.